Film / White Sun of the Desert 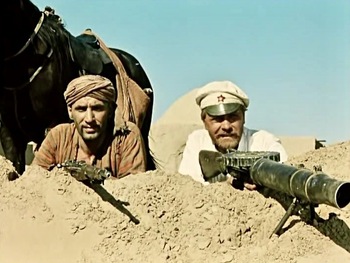 White Sun of the Desert is a cult Soviet Western type action movie (although, since it's set in the East, it's technically an Ostern), filmed in 1969. Director Vladimir Motyl rewrote the screenplay by Rustam Ibragimbekov to include references to a number of screen Westerns (from both the United States and Italy). The film was initially prohibited from Russian cinemas, but Leonid Brezhnev, having seen it at his villa, decided to allow White Sun to be released. The film went on to break all Russian box-office records, with over 50 million tickets sold.

The setting is the east shore of the Caspian Sea (today's Turkmenistan), where the Red Army soldier Fyodor Sukhov has been fighting the Civil War in Russian Asia for a number of years. After being hospitalized and then demobbed, he sets off home to join his wife, but is caught up in a desert fight between a Red Army cavalry unit and Basmachi guerrillas. The cavalry unit commander, Rahimov, "persuades" Sukhov to help, temporarily, with the protection of abandoned women of the Basmachi guerrilla leader Black Abdullah's harem. Leaving a young Red Army soldier, Petrukha, to assist Sukhov with the task, Rahimov and his cavalry unit set out to pursue the fleeing Abdullah.

Sukhov and women from Abdullah's harem return to a nearby shore town. Soon, looking for a seaway across the border, Abdullah and his gang come to the same town...