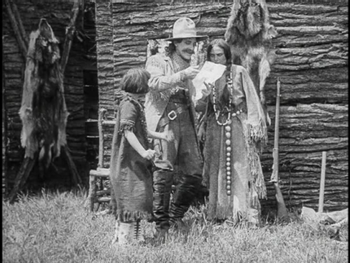 The story involves a mixed-race couple living on the Pine Ridge Indian Reservation in South Dakota. One day the husband, a white man named Combs, receives word that he has received a large inheritance. His wife White Fawn, a Sioux, tries to stop him from leaving. When he remains determined to go, White Fawn stabs herself in the chest with a knife. Their daughter sees the husband bent over White Fawn's body and concludes that he killed her. The daughter then tells the tribe, which sets out after Combs.

White Fawn's Devotion is the oldest surviving film made by Native Americans. It has a place on the National Film Registry. Compare The Daughter of Dawn, a 1920 feature film with an all-Native American cast (although it was written and directed by a white man).