Film / The Perils of Pauline 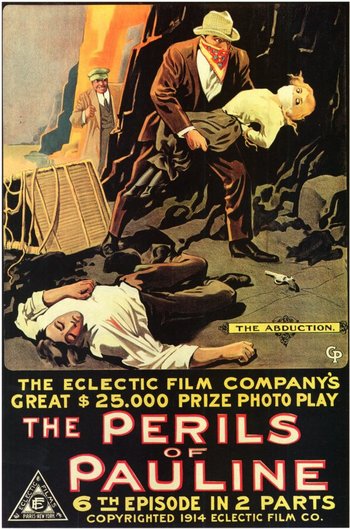 Bound and Gagged as usual.
The Perils of Pauline was an immensely popular 1914 film serial starring Pearl White, who in this serial became the veritable Trope Codifier for the Damsel in Distress in modern media.
Advertisement:

The formula was simple. Pauline is an orphan, heir to a huge fortune. Her guardian, Mr. Marvin, hopes that a now grown-up Pauline will marry his son Harry. Pauline loves Harry, but she doesn't want to get married yet, wanting to roam the world and have adventures before she settles down to be a society wife.

In the first episode Mr. Marvin dies, and Pauline and her fortune come into the custody of Marvin's secretary Koerner. Unfortunately Koerner is a crook. With Pauline having no other living relatives, he and his partner Hicks decide to arrange for Pauline's adventures to have a fatal outcome, so they can seize her fortune. Each episode would then involve Pauline going off on some adventure, getting into mortal peril thanks to Koerner, and being rescued by Harry.

Not the first film serial, but a hugely popular one that became a Trope Codifier for film serials. Did not feature some of the tropes that are associated with it in the popular imagination. It didn't really rely on cliffhangers, as Pauline's adventures were resolved at the end of each episode. Nor is there a Dastardly Whiplash; Koerner the bad guy is young and clean-shaven and not particularly hammy in his mannerism. Nor was Pauline Chained to a Railway... in surviving footage, anyway (see below). Even in 1914, that trope was considered hokey and a staple of cheap theater.

The original run was 20 episodes, one per week, which added up to 410 minutes. That version is now lost (and there are sources who insist up, down, and sideways that Pauline, some rope, and a railway did cross paths at some point in this cut). The surviving Pauline is a Re-Cut version made for the French market, which was cut down almost by half (214 minutes) and lasts only nine episodes. The series proved so popular that it was followed by a Spiritual Successor, The Exploits Of Elaine, in which Pearl White played a similar character getting into similar predicaments.

Not to be confused with other films of the same name including the 1933 serials; the 1947 film, which is a humorous take on Pearl White's rise to fame, or the 1967 comedy based on the serial.