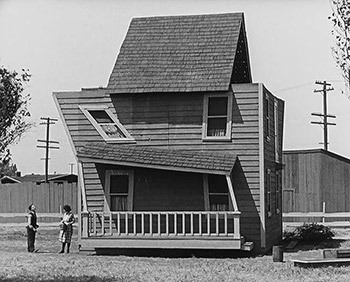 Where's Extreme Makeover: Home Edition when you need them?
"The wedding bells have such a sweet sound but such a sour echo."
— Opening intertitle
Advertisement:

One Week is a 1920 short film starring Buster Keaton and Sybil Seely as newlyweds who receive a DIY portable house as a wedding gift. They spend a week assembling it with disastrous results thanks to sabotage by a rejected suitor, as well as their own hilarious ineptness.

"One Week" provides examples of: