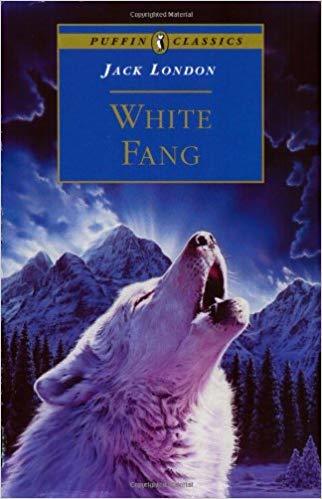 White Fang is a 1906 novel written by Jack London, often published together with The Call of the Wild nowadays. Whereas the latter 1903 novella is the story of a tame dog adapting to the wild, White Fang is the story of how the titular wild one-quarter-dog-three-quarters-wolf becomes tamed.

The novel starts with two men and their dog sled team being pursued by a wolf pack in the Northland Wild. Desperate for food during a famine, the wolves eventually kill all of the dogs and one of the men before the other is rescued. The starving pack eventually splits up, the She-Wolf who lured the sled dogs to their doom going off with her mate, whom the narrator refers to as One Eye. The two raise a litter of pups, only for One Eye and all the litter except one to die. The She-Wolf and her surviving pup eventually meet up with a group of Mackenzie Indians; one of them, Grey Beaver, recognizes the She-Wolf as Kiche, his brother's runaway half-wolf-half-dog, and takes possession of her and her pup, whom he names White Fang.

So begin White Fang's lessons in cruelty and mastery. The puppy pack he now belongs to see him as a wolf and treat him as an enemy. The abuse he endures from them, particularly the leader Lip-lip, makes him both stronger and more vicious, gradually turning him into a brutal, savage fighter. Nevertheless, he adapts to the laws of his new surroundings and develops a loyalty and respect for Grey Beaver, who eventually sells Kiche and takes White Fang to his trading post at Fort Yukon.

At the Fort, the young wolf catches the attention of "Beauty Smith," who introduces Grey Beaver to whiskey in order to get him to sell White Fang. The book now takes the reader into the horrible world of dog fighting, where drunken men put two starved, violent dogs in the ring, but only one comes out alive. Thanks to his sadistic new tormentor of an owner, White Fang becomes an unbeatable monster, forced to fight wild wolves, several dogs at once, and even a lynx for entertainment. It is during a fight where a bulldog all but kills him that White Fang is finally rescued by Weedon Scott.

Like John Thornton in Call of the Wild, Scott introduces White Fang to The Power of Love for the first time, and his love slowly heals the wounds of abuse and torture and transforms the monster into a tame friend and protective ally. Scott eventually takes White Fang back to his father's estate in the Santa Clara Valley, where he must adjust to living as a tame pet and learn which animals are fair game (jack rabbits, squirrels, and quails) and which he must leave alone (chickens, cats, other dogs). He ultimately repays Scott for his love and protection by saving his family from a murderous intruder one night (an escaped convict whom Judge Scott unknowingly sent to prison for a crime he was framed for). The reader leaves White Fang surrounded by the puppies he fathered with the sheepdog Collie.

Definitely not a Coming of Age Story about A Boy and His X but a harsh look at life in the rugged Northland Wild where only the strong survive and an ugly examination of the forces that shape the clay that is the human mind.

The novel was adapted to a namesake film in 1991, directed by Randal Kleiser. The film cast a real wolfdog, Jednote incidentally, the same dog who played the initial Thing in The Thing (1982)!, into the role, with Ethan Hawke cast as his beloved master Jack Conroy and Klaus Maria Brandauer as Alex Larson. It also spawned a sequel, "White Fang 2: Myth of the White Wolf" (1994). This one briefly featured Hawke. but the main human characters were Henry Casey (Scott Bairstow) and Lily Joseph (Charmaine Craig).

There was a television series based on the novel between 1993 and 1994. Not related to the films above, though probably inspired by the success of the first one. It lasted a single season, 26 episodes. All episodes are available on DVD. There was also an Animated Adaptation between 1992 and 1994, The Legend of White Fang, that was heavily bowdlerized to make it suitable for children. A 2018 French-English animated film version (starring Nick Offerman and Rashida Jones) was made widely-available on Netflix.