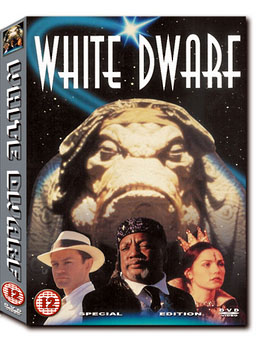 White Dwarf is a made-for-television movie that aired in 1995.

In a science fiction future, student doctor Driscoll Rampart expects to become a physician to the rich and powerful, but is required by his school to perform his internship on a distant, rural planet named Rusta, orbiting a white dwarf star. The world is tidally locked to its star, leaving one side perpetually light, the other perpetually dark, with a massive wall separating the two sides. Rusta is only able to support life due to Terraforming, maintained by the "Regulators". The light side is a Victorian-style colony which has adopted the tropes of the American Old West, while the dark side is a Medieval-style kingdom.

The story follows Rampart's character development from vain, arrogant snob to compassionate and caring physician. The movie also includes a side plot involving political intrigue between the rulers of the light and dark sides, including a Hamlet-style murder, an association deliberately referenced by the assassin.

White Dwarf was written as an allegory of prejudice and ignorance by Wild Palms writer Bruce Wagner. Essentially a Recycled IN SPACE! retelling of Akira Kurosawa's film Red Beard, it picks up many of the tropes invoked by that film, and adds many of its own.

No connection to the British tabletop games magazine.