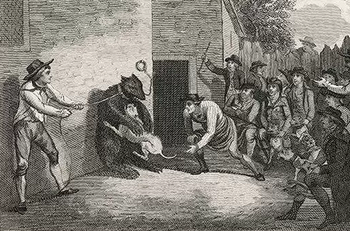 Bear Baiting, 1795 (from The Sporting Magazine, London)
"I cheered at the banderilleros' display
As they each stuck the bull in their own clever way
For I hadn't had so much fun since the day
My brother's dog Rover
Got run over!"
— Tom Lehrer, "In Old Mexico", An Evening Wasted with Tom Lehrer
Advertisement:

Nobody thinks animal bloodsports are boring. They're sure to get the blood pumping, although whether that's from the excitement of watching the fight or outrage at seeing such cruelty depends on the observer. Animal Bloodsports come in two varieties: animal versus animal, and animal versus human.

Animal versus animal bloodsports involving two similar animals include cockfighting and dogfighting, most prominently. With dissimilar animals involved, bear-baiting and badger-baiting — having dogs attack a leashed bear or badger, respectively — may be observed. Animal versus animal bloodsports may also involve betting, and the attendant attempts to rig the game. Naturally, animals themselves can't be paid off to take a dive, so the methods used to change the animal's chances may be clinical, perhaps involving the services of a not-so-Kindly Vet.

Animal versus human bloodsports can be further divided into sports where the odds are overwhelmingly on the human's side (although not so much as to obviate the need for the human to be skilled), as with a bullfight, a roughly fair fight, or sports in which the odds are on the animal's side. At the extreme of the odds being on the human's side, it effectively ceases to be a sport (insofar as it ever was) and becomes an animal Snuff Film. At the extreme of the odds being on the animal's side, the human is simply Fed to the Beast. Generally, where the odds are not in the humans' favor (being either roughly even or in the animal's favor), see Gladiator Games.

Fox hunting is a hybrid, with human and animal vs. animal, with humans and dogs double-teaming foxes. Whereas most animal bloodsports seem to mark the dark side of the lower classes, fox hunts are the the province of the upper-crust. Rat baiting was a combination sport and dog-training method, as professional rat-catchers would release the rodents into pits and then set their terriers on them for practice, often taking bets on how many each dog would kill.

Regardless of the type, Animal Bloodsports are usually — but far from unanimously — regarded as repugnant. Dogfighters are regarded as scum. Cockfighters may get off a little easier, but are still unsavory. Animal bloodspots may also serve as a sign of the unpleasant aspects of bygone times, with Medieval Morons enjoying the cruel spectacle without modern qualms. Rat baiting took longer to be banned than most such "sports", as rats were legally classified as vermin and didn't evoke any public sympathy; eventually, concern for the dogs' welfare got it outlawed, too.

As for when humans are involved, bullfighters — perhaps because they put themselves at risk (although not as much as the bull), rather than just having the animals fight it out — may be a little better. Some Spaniards in Real Life are defensive about bullfighting, especially against foreign critics, as a distinctive part of their culture which foreigners don't get, although a majority of Spaniards dislike bullfighting.

Compare Mons, where there's an element of training and capturing/collecting the animals as well and Attack Animal for when animals are used as actual weapons, rather than a spectator sport.

Anakin, PadmÃ©, and Obi-Wan are almost killed by animals in the arena on Geonosis.

Anakin, PadmÃ©, and Obi-Wan are almost killed by animals in the arena on Geonosis.