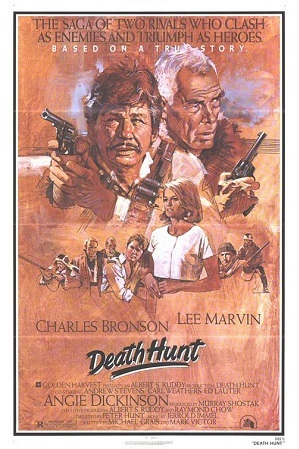 Death Hunt is a 1981 Northern film directed by Peter Hunt and starring Charles Bronson and Lee Marvin, with a supporting cast including Angie Dickinson, Andrew Stevens, Carl Weathers, and Ed Lauter. It is loosely based on the real-life manhunt for Albert Johnson

In Canada's Yukon Territory in 1931, World War I veteran Albert Johnson (Bronson) arrives in a frontier town and quickly makes an enemy out of the locals by interrupting an illegal dogfight. Things go from bad to worse when a local band attack Johnson's cabin, who retaliates by killing one of their men. Disillusioned RCMP Sergeant Edgar Millen (Marvin) is forced to hunt down Johnson in the extreme north before he can escape beyond their jurisdiction into Alaska.