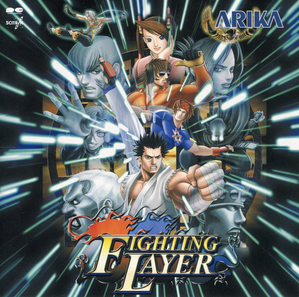 "Are you right? Are you ready? GO!"
Advertisement:

Fighting Layer was developed in 1998 by game company Arika and published by both Arika and Namco as an attempt to create a similar game to Arika and Capcom's modest-success, Street Fighter EX, without having it tie in with the game's Excuse Plot or the Capcom-owned characters. The game includes Allen Snider and Blair Dame, both characters from the first EX game. Debuting with this series:

Along with them are three unlockable bosses:

As well as unplayable characters:

The game played similar to Street Fighter EX but with the addition of multiple ways of getting to the Final Boss (the stage progression is mapped out with multiple routes converging at several areas).

The game was only released in Japanese arcades and none of the characters (besides Allen and Blair) were ever featured in another Arika or Namco property. It's rare for someone (even in Japan) to know about the game, let alone have played it. So yeah, it's a little bit obscure.

It has a Spiritual Successor called Fighting EX Layer, only with the characters Arika created for Street Fighter EX (and Terry Bogard). However, on a good note, some of the game's music are in there if selected in that game's option setting on "Extra" in FEXL.