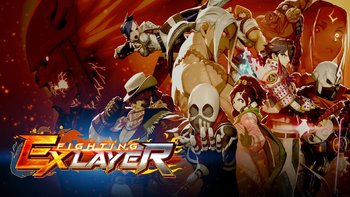 Fighting EX Layer is a 1-on-1 competitive Fighting Game developed and published by Japanese developer Arika, released as a PlayStation 4 exclusive on June 28th, 2018. The game serves as a Spiritual Successor to the Street Fighter EX series and Fighting Layer, also developed by Arika, as best evidenced by its use of gameplay mechanics from both EX (a multi-level Super Gauge in the vein of Street Fighter Alpha, the ability to cancel Super Combos into other Super Combos, Guard Breaks) and Fighting Layer (walled 3D arenas, the ability to sidestep)—though the 3D elements from Fighting Layer were later stripped out during development, leaving the game a 2½D fighter much like Street Fighter EX was.

Returning characters added via (free, except for Terry being paid) DLC have since included the Arabian princess Pullum Purna and the fiery Italian fighter Vulcano Rosso in version 1.10; secret agent Sharon and a Guest Fighter, the Legendary Hungry Wolf from Fatal Fury and SNK icon Terry Bogard in version 1.20; and tech-savvy Area in version 1.30.

The game has also been playable on Nesica-X-Live 2 cabinets since November 29, 2018 in Japan. There is a PC/Steam version as well, with 4K resolution support, released on November 30th, 2018 worldwide. A mobile version titled Fighting EX Layer -α (Alpha) was released on April 1st, 2019 for both iOS and Android. A Nintendo Switch port known as Fighting EX Layer: Another Dash was announced in February 2021. It was released on April 1, 2021 in Japan, and May 20, 2021 worldwide.

Another Dash comes with all of the characters of the original. However, this version removes the Gougi decks in favor of universal EX moves which cost meter.