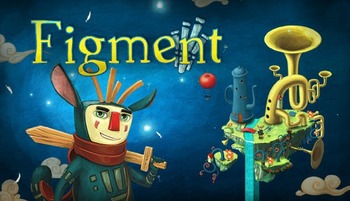 Journey into the mind to end the nightmares.
Advertisement:

Figment is an Action-Adventure game with Puzzle Game and Musical elements, released by Bedtime Digital Games on September 22, 2017.

The main character, a humanoid in some sort of animal onesie (or possibly with actual animal parts) named Dusty is a figment of imagination living in a person's head and protecting him from various nightmares with his sidekick, a bird named Piper. Dusty has been out of action for a long time at the beginning of the game. Piper begs him for help defeating the three nightmares who have invaded the mind. Dusty initially only goes with Piper because one of the nightmares stole his drink, but as the game goes on, he becomes devoted to protecting the mind world once again.

The game is notable for having a beautiful art style combining hand-drawn/painted elements with 3D elements. Because of the mind/dream setting, there is some surreal imagery and unique world and character designs.

The game is available on pretty much every store and Operating System going (with the notable exception of the Xbox One, which is in development); Steam, GOG.com, Epic Games Store, Nintendo Switch, Apple's App Store, Android via the Google Play Store, and PlayStation 4. A port for MacOS can be found via Steam, GOG and the Epic Games Store, and a Linux port can be found via Steam and GOG.

A short prologue to the sequel, Figment 2: Creed Valley was released 16th of January, 2021 with the full game following close behind. In it, Dusty and Piper go on a new adventure to rid the titular valley from a new threat.