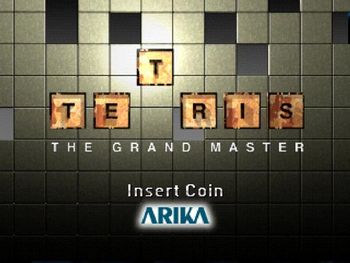 A screenshot wouldn't do the game speeds justice. Just look up videos for an idea of how intense it gets.
Ready, go!
Advertisement:

Thought you were awesome at Tetris? Guess again.

Tetris: The Grand Master is a series of challenging Tetris games developed by Arika, intended for advanced players.

The TGM series plays a bit similar to usual Tetris games (specifically, Sega's versions of the game). However, there are a few mechanics that alter the game dramatically. Leveling up, for instance, is no longer just done through clearing lines; instead, every piece you drop will raise the level counter by one, as well as clearing lines (one per line clear). However, level numbers also take on a different meaning: the game speeds up only at particular levels, rather than with every level. The level stops going up at level n+99, where n is a multiple of 100; at that point you must clear a line to level up.

At level 500, the game's drop speed maxes out and pieces drop instantly in what is known as "20G"note 20 grid cells per frame (1/60th of a second). The playing field is 20 blocks high. Do the math. speed, forcing you to slide pieces along the stack (or ground) into place. And in newer games, some of the game's finer details are adjusted to make the game harder. 20G went on to be featured in other, more mainstream Tetris games, such as Tetris DS, but most of those games had a mechanic known as "infinite rotation", so in practice, the drop was instant but the lock could be delayed indefinitely for each piece; this is not the case in TGM. In speed-ups after 20G, the time that the pieces take to lock decreases. The game ends at level 999.

Another major mechanic is the grade system. Instead of being ranked by score, you are given a grade, typically starting at 9 and going down to 1, followed by S1 through S9, followed by the titular Grand Master rank (or filler grades between S9 and GM, depending on the game). In the original TGM, Scoring Points will raise the grade, but newer installments use more complex mechanics to increment one's grade.

Unfortunately, if you want to play TGM, especially legitimately, you're not going to get a chance so easily. None of the arcade games have had ports (as mentioned above, TGM2 almost got ported to the PS2), and TGM ACE, as mentioned above, isn't exactly a TGM game. There are, however, clones that allow you to simulate the TGM series:

, although it is primarily in Japanese. It also has an official social media hashtag, #tgm_series.

In 2019, Arika would return to Tetris games with Tetris 99, a Tetris game with a 99-player battle mode. Although it contains references to the TGM series, it is not connected to its predecessor.

Despite the franchise's dormancy, Arika vice president Ichiro Mihara revealed on November 1st, 2021 that the company is planning to announce ports

of the TGM games (although which ones were not specified), and a potential fourth TGM game may be considered depending on the success of the ports.

The Tetris: The Grand Master series provides examples of:

but...
Let's go better next time