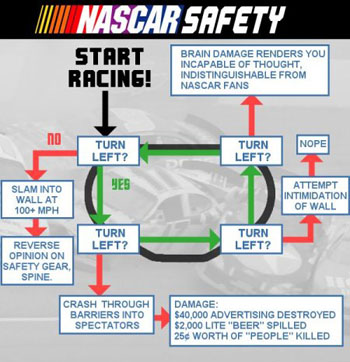 The average Joe's understanding of NASCAR.
"There's not a lot of people who know that."
— Peter Sellers, imitating Michael Caine (who, incidentally, never actually said that line.)

There's a diverse array of titles within any one medium. Not all video games are Pac-Man or Wii Sports or Grand Theft Auto or Super Mario Bros. or Pokémon or Tetris or Halo. There are games like the Silent Hill series, which try to immerse you in an environment before gradually creeping the living daylights out of you over time. Or The Elder Scrolls series, which presents to you a wide-open world and several big choices you can make in it, giving you freedom to experiment and explore.

The general public doesn't (always) know that, though — people who don't play video games think that all games are like the ones they hear about on TV, which would tend to be either Wii Sports (due to the Wii showing up in retirement communities all over the place), Super Mario Bros. (due to Mario's recognizability as a Series Mascot), Pokémon (due to the "Pokémania" fad of The '90s and the much later success of Pokémon GO), or the latest "controversial" violent game that the media love to shove in people's faces. If these people are older, expect their perceptions of video games to be even worse.

Likewise, comic books are not all about superheroes in costumes fighting supervillains with outlandish plots, nor are they essentially printed versions of superhero movies where Iron Man is exactly like Robert Downey Jr. and Wolverine is exactly like Hugh Jackman. There are a great many comics telling other kinds of stories, such as the numerous indie Slice of Life comics like Seconds or Amelia Rules!, the surreal dreamscapes of Little Nemo. The Japanese manga scene has many well known titles from different genres, ranging from heartwarming love stories such as Kimi ni Todoke, to cute family comedy like Yotsuba&!, to Action-Adventure series such as One Piece, to even horror fare like the works of Junji Ito. Certainly the Super Hero genre itself is much better written than what is stereotypically attributed, and can also differ greatly from your typical Hollywood superhero action-fest: Watchmen and Batman: The Dark Knight Returns should be proof enough of that. If you say you like comic books, people might respond with something like, "So you like Superman, Batman and Spider-Man?"note If you're in North America, that is; in Europe the response will be more along the lines of, "So you like Donald Duck and Asterix?", and in Japan it may be something like "So you're into Doraemon and Kitaro?". Keep also in mind that comic books there are much more respected, even if proper literature is considered to be better. Some comics (usually ones dubbed "graphic novels" to eliminate this very problem), like the autobiographical Fun Home or the aforementioned Watchmen, have won awards for their artistry and originality.

And of course, cartoons. We know all about the Animation Age Ghetto and Animated Shock Comedy. Cartoons are often still stereotyped as being all about humor and comedy. On the other hand, many companies seem convinced that kids will watch cartoons only if they are funny, and add extraneous humor that sometimes clashes with the mood just to fulfill their comedy quota. Often, animators have to start with an R-Rated Opening in order to warn young audiences and their parents that what they're watching isn't a Disney animated flick just because it had cartoon people on the cover.

This is especially true for anime. In the public eye, anime is either associated with the Animation Age Ghetto and series that were marketed to kids - Sailor Moon, Dragon Ball and Dragon Ball Z, Pokémon, Yu-Gi-Oh!, and maybe Naruto, My Hero Academia, and the Studio Ghibli library if you're lucky - or with sordid, lecherous hentai. Thanks to the spiked interest during the 2010s, it now also has the stigma of being for geeks shelling out half their paycheck to get two episode's worth of content, or their entire paycheck for The Merch. And the dialogue is either poor dubbing along the lines of Speed Racer, or blatant "Blind Idiot" Translation.

Tabletop RPGs used to be nigh unknown except in general nerd circles, and only Dungeons & Dragons had any real recognition factor, mostly due to the moral panic about it in the 1980s in the US. However, the release of 5th edition D&D, the popularity of Stranger Things, and the rising attention to projects like Critical Role and The Adventure Zone have made D&D more popular than ever, making it much more well known than it was at the end of the 2010s. Though, you'd still be hard pressed to find your average person who can name a tabletop RPG that isn't D&D.

The public at large has these prejudices and preconceptions. But this trope can also be an example of a prejudice in itself against the general public. In some cases this trope can be true, but it is also equally possible the larger public is aware of diversity and just isn't blabbing about it with the people who really love it. In the past, we determined what was known by what people actually sat around talking about. Nowadays, when you can gather with people that do all want to talk about this or that, the line between what is a majority/minority and what the general public knows is blurred beyond repair.

"Common Knowledge" is usually ignored in these situations. Works that fall into this have a high tendency to suffer from an Audience-Alienating Premise. Exposure to a Gateway Series can certainly be very helpful to break these prejudices. If a significant title stands out from the perceived "ghettoed" group, No True Scotsman is often applied to try and distance a well-liked entry from it, with Hitler Ate Sugar being applied to reinforce the ghetto back onto that entry. Related to Pop-Cultural Osmosis Failure. See also Mistaken for Index. There even is a kind of meta inversion possible when Too Much Information collides with Complaining About Shows You Don't Watch (a Lowest Common Denominator work, you wouldn't touch it at gunpoint, but all media report about it and you can't avoid it).

Tropes associated with this:

All examples of this are right in those sub pages, or in the page's Discussion thread.

Browsing TV-Tropes? So you are a nerd!