All Animation Is Disney 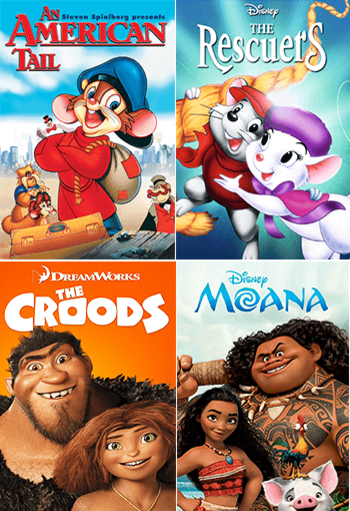 Not all animation is Disney. Just half of it.
"But in animation, everyone is expected to come as close as they can to Walt Disney. That's not a rap on Disney. He was a genius, an innovator... his stuff was so terrific that people came to believe that that was all there was to animation."
— Ralph Bakshi, in the notes for the DVD release of American Pop
Advertisement:

Ah, the Disney Animated Canon. Such wonderful movies to be found in it: Snow White and the Seven Dwarfs, Beauty and the Beast, The Lion King, The Swan Princess...

Wait, what do you mean that last one doesn't belong? It's not Disney? Don't be ridiculous, only Disney could produce animation of that quality!

Sadly, many people in Real Life believe that, if it's a quality animated feature film, it was made by Disney. This is possibly a side effect of the Animation Age Ghetto, as people are led to believe that not only are all cartoons for kids, but they're all made by the same kid-friendly company. Who (aside from fans of animation) wants to tell these people that there's more than one animation studio out there? Small Reference Pools might play a role here, as well. Some people go so far as to believe that Disney invented animation, which isn't true either: Walt was still in junior high school when Gertie the Dinosaur was released (though he did release the first feature-length hand-drawn cartoon, namely Snow White and the Seven Dwarfs).

Remember, though, that Disney is the market leader in animated movies, and so it's understandable that rival animation studios follow trends set by the Disney Animated Canon (including Disneyfication). One critical reason is Don Bluth, responsible for taking that style with him when he left Disney, using it in his films with other studios and making that line more blurred if you're not paying closer attention than looking and assuming. Disney also releases films not made by a Disney animation studio, such as The Brave Little Toaster, and handles international distribution of some bigger-name foreign animators, most notably the works of Studio Ghibli (prior to GKids buying out the distribution rights to the majority of the latter's backlog).

Though it seems easy to distinguish when doing the bare minimum of research, Disney uses Vanity Plates on its work, and so do the other big-name animation studios. However, this can be muddied somewhat when studios strike up unanticipated strange licensing agreements - for example, Disney having the broadcast rights for Thomas & Friends in Asia, and between 2009 and 2016, somehow also ended up with the distribution and broadcast rights for DreamWorks movies in certain regions, creating a very bizarre scenario where Shrek and Over the Hedge were screened on Disney Channel Asia

(and in the case of Japan, a double whammy where The Penguins of Madagascar screened on Disney Channel Japan because they no longer have a Nickelodeon feed in the country, in addition to Dreamworks' said agreement with Disney).

Since Disney's most famous movies are traditionally animated films, this usually applies to traditionally animated movies. On the CGI front, DreamWorks has become a big enough name in its own right that their films rarely get mistaken for Pixar's anymore. The other guys (such as Blue Sky Studios, Illumination Entertainment or Sony Pictures Animation)... not so much. If it shares DreamWorks' tendency towards subversive or referential humor, chances are it'll get mistaken for one of their films. So a sub-trope of this could be "All CG Animation is Pixar or DreamWorks".

As being an animation fan as an adult becomes less stigmatised, this trope is beginning to die off. This is also due to many films such as The Secret of NIMH and The Iron Giant gaining cult followings and being recognized as some of the best animated films, largely even considered contenders to Disney in quality. However, because of Don Bluth becoming a household name in the animation community, it's still common for people to believe that all non-Disney 2D-animated films were made by him instead. Just make sure not to make this mistake around animation fans. At the very least, you'll get eye-rolls from them.

Subtrope of Wrongfully Attributed. Compare/Contrast All Anime Is Naughty Tentacles and Disney Owns This Trope. Misattributed Song is the variant of this trope for music. When official sources mix up the studios, it's usually because the writer pulled a Cowboy BeBop at His Computer.

Not to be confused with Disneyesque or Disneyfication. Of course, sometimes the confusion goes the other way and a film really is by Disney, but it's hard to convince people of this because it's so "un-Disneylike" (Pretty Woman or Pulp Fiction, among many, many others).

Animated mockbusters often play on this trope deliberately to make unwary customers think their cheap knockoff is the original.

Works mistaken for something else than Disney: