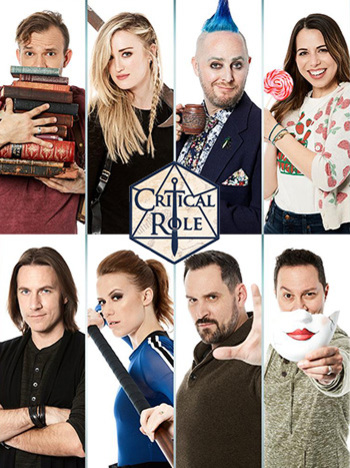 Critical Role is a weekly Actual Play web video series where a group of well-known voiceover artists and actors sit around and play Dungeons & Dragons. With a cast of talented performers playing every role in the game, you know you're in for a good time.

It began as a one-time adventure developed by Matthew Mercer as a birthday present for Liam O'Brien in 2013. However, it was so well received by the group (most of whom had never played D&D before) that it grew into a regularly-occurring game played on their own time for over a year, gathering more players along the way. Eventually, Matt was invited to livestream the game as part of the Geek & Sundry web channel, creating the show we know as Critical Role. While the original campaign was played using the Pathfinder game system, Critical Role saw the group convert to a home-ruled version of Dungeons & Dragons (5th Edition).

Critical Role launched on Geek & Sundry in 2015 and became its biggest draw, proving to be an instant success due to the big names behind it and the charm of the show itself. The show spawned a huge fandom and inspired many to try out Dungeons & Dragons for the first time, thanks to it showing just how fun and imaginative tabletop gaming can be. It has even been credited with playing a massive part in the resurgence of Dungeons & Dragons in the past few years.

In June 2018, Critical Role moved production into its own newly-acquired studio and launched its own website

(short D&D tutorial videos for beginners), Between The Sheets

(in-depth, one-to-one interviews with the cast and celebrities, and hosted by Brian W. Foster), and All Work No Play

(an adaptation of Liam and Sam's original pre-stream podcast where they try new activities). In 2019, they added three more shows: MAME Drop

(Brian and Travis play video games while trapped(?) in an increasingly complex framing device with puppets). In February 2019, the cast announced that they had officially separated from Geek & Sundry, moving the main show and Talks Machina

In October 2019, Mini Primetime with Will Friedle

premiered on the channel, hosted by Will Friedle, where he teaches the cast and the audience how to paint their characters' miniatures.

In 2020, alongside with a second season of All Work No Play, there have so far been 2 social-distancing compliant versions of preexisting shows, as well as three new ones: Yee-Haw Off the Ranch

(Brian and Ashley play video games while occasionally getting Zoom calls from yet more puppets) and AWNP: Unplugged

(Liam and Sam catch up with each other and some very special guests over video chat) in the former category, and Critter Hug

(A game in which one member of the cast records themselves telling a story, sends it to another, who must watch it once and only once, and then retell it, rinse and repeat), and Mighty Vibes

(Lo-Fi music set to animation of the player characters) in the latter.

The cast for the first campaign is as follows:

Together, they raid dungeons, and are pretty damn funny doing it.

The second campaign of Critical Role began airing on 11th January 2018. Taking place over twenty years after the events of the first campaign, this new adventure is set on the continent of Wildemount and features a brand new set of player characters. In contrast to the blossoming frontier of Tal'dorei, Wildemount is steeped in the rust of the ancient Dwendalian Empire: a nation where security is bought with fealty, money flows to the rich and devious, and whispers of discontent lurk in the shadows of gilded walls.

The cast for the second campaign is as follows:

You can watch the show live on the official Critical Role Twitch.tv channel

every Thursday evening (well into the morning hours of Friday for those in Europe and beyond). Archived VODs of episodes 1-51 are available via the Geek & Sundry youtube

. As of episode 52 production has officially separated from G&S and new episodes are now hosted by the official CR Youtube

Tropes found in both seasons:

A-I
The Bright Queen: The cycle cannot be broken until there is nothing living. All we can do is our best to keep it slow.
J-P
Q-Z

Is it Thursday yet?