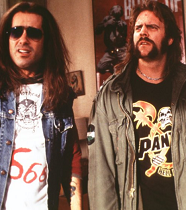 Say what, dude?
They can't stop us, let 'em try!
For Heavy Metal we will die!
— Manowar, "Die For Metal"
Advertisement:

Also known as headbanger, thrasher, or hesher, the metalhead is a typically male character that started showing up in movies and television shows in the 1980s as Heavy Metal became popular. As the title implies, he is a very passionate fan of hard rock and heavy metal music and is not shy about expressing it. Unfortunately, some express their opinions too much to the point of coming off as an elitist Jerkass (and No True Scotsman is by no means uncommon).

The metalhead can usually be identified by any combination of the following: long hair, tattoos, piercings, beard or mustache, a black t-shirt bearing the logo of his favorite band (occasionally a hoodie as well), a black leather motorcycle jacket, tattered denim jeans, camo pants, high-tops, skate shoes (almost always Vans Old Skools), Converse (typically All Stars), combat boots, or a denim vest adorned with pins and patches. They are also known for using the "heavy metal horns" hand gesture as a way of showing their approval for something. Most metalhead characters are male, though female examples exist. Metalhead characters usually live in a Poster-Gallery Bedroom with walls covered in heavy metal band posters (and sometimes they still live in Mom's Basement). Female metalheads will generally be presented as either The Lad-ette or as Gloomy Goths, and are liable to be either incredibly beautiful and ultra-sexualised (the male metalhead's assumed ideal) or comedy fat girls.

He usually has a menial job and dreams of one day being in a successful band. He likes to say "dude" and "awesome" a lot. Although he doesn't have a lot of book smarts, his knowledge of heavy metal is staggering and he can debate for hours what bands should and should not be considered "metal." Other stereotypical things that the metalhead loves are muscle cars, motorcycles, beer, Horror Films, violent Video Games, and (depending on the portrayal) marijuana or violent anime. S/he may also be portrayed as a Hollywood Satanist for good measure.