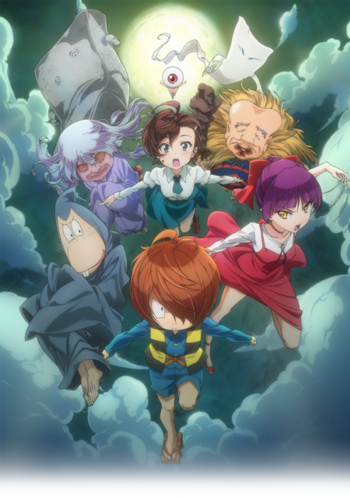 GeGeGe no Kitarō is a well-known (in Japan) manga and anime that is largely credited for bringing back knowledge of traditional yōkai and folktales to modern generations. Written by Shigeru Mizuki, it was originally known as Hakaba Kitarō (Kitaro of the Graveyard). The story focuses on the adventures of the yōkai boy Kitaro, who fights for peace between the yōkai and humans using a variety of strange abilities and tools. "Ge ge ge no ge" is a sound effect meant to represent ghostly laughter.

That's the simple explanation. If you've never heard of this series, it's because it doesn't often show up in Western media, where it remains very obscure.

The story follows Kitaro himself: a "ghost boy" who is missing one eye. The empty socket is usually covered by his hair, and usually houses Medama-Oyaji (Papa Eye), literally an eyeball with a body, who is also his father. (Yes, really.) Kitaro also has remote-controlled geta sandals, a detachable hand, and a spiky hair vest which he can use to attack enemies, as well as a few other abilities.

Other characters in the main ensemble include Nezumi Otoko, a half-human half-yōkai filthy rodent, Neko Musume, a Cat Girl who can transform and harbors a crush on Kitaro, Sunakake Baba, the sand yōkai woman who runs an apartment for yokai, Konaki Jiiji, an absent-minded elderly yōkai who can turn himself to stone, Ittan Momen, a sentient strip of white cloth, and Nurikabe, a large yōkai shaped like a wall.

The original manga ran for about ten years, between 1960 and 1969, and multiple versions and adaptations have been written since, developing a rather different canon as the series progressed. (Kitaro especially is much weirder and much less child-friendly in the original.) The different anime versions have been running more or less from 1968 to the present, with the sixth adaptation beginning in 2018. It has also been adapted into multiple live-action versions and video games, as well as earning a place in several theme parks, like Fujikyu Highland. The creator's hometown of Sakaiminato has also been marked with multiple statues of the various characters in recognition of the series' influence.

The series is finally available in English, courtesy of Drawn and Quarterly