Manga / Hanako and the Terror of Allegory 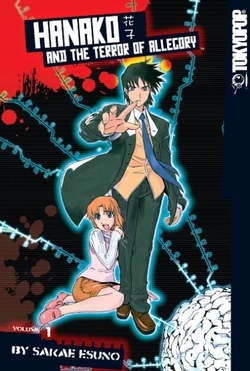 Hanako and the Terror of Allegory (Hanako to Gūwa no Terā) is a manga by Sakae Asuno, creator of Future Diary and Big Order. It ran in Monthly Shonen Ace from 2004 to 2005, and was licensed in English by Tokyopop.

When Distressed Damsel Kanae Hiranuma finds her sleep disturbed by a man with an axe under her bed, she follows a tip from an internet chatroom and pays a visit to the Allegory Detective, Daisuke Asou. Asou reveals that she has been possessed by an allegory, an Urban Legend that turns its content into reality and haunts the people who believe in it. With the help of Hanako of the Toilet, a benign allegory possessing him who assists him in hunting allegories, Asou rescues Kanae. In thanks, Kanae becomes Asou's assistant, and the three of them tackle the myriad allegory cases that come their way, while a deeper mystery of Asou's true nature slowly unfolds.