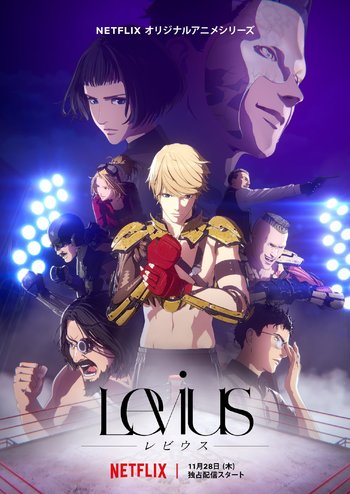 In a World… that's in its equivalent of the 19th century, it is also recovering from a devastating war over a valuable resource - the Agartha water. A substance that, combined with someone's blood, instantly turns into compressed steam - one that can be controlled at will by the blood "donor". It discovery lead to leaps in engineering development, one of the most appreciated being the creation of highly advanced and widely available cybernetic prosthetics.

Soon, with the growing number of augmented people among the populace, a new sport was created - metal boxing, where flesh and metal combine and face other in combat, often with fatal results.

Young Levius Cromwell is one of those battlers, hell-bent on winning due to tragic events he faced in his childhood during the war. He slowly climbs the ranks, but unbeknownst to him, a sinister plot creeps into the sporting events.

The series received an Animated Adaptation by Polygon Pictures, which was released worldwide on Netflix on November 28, 2019.