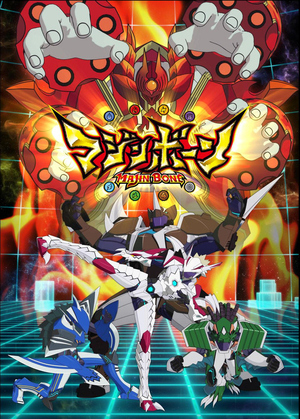 Majin Bone is a digital card game about armored warriors by Bandai Namco Entertainment. A manga series is serialized in the magazine Saikyo Jump by Shueisha and an anime television series by Toei Animation debuted on April 1, 2014 of Spring 2014 Anime.

The anime focuses on Shōgo Ryūjin, a young man who gets caught up in the fighting over Dragon Bone, a guardian entity of the earth that bonds with him. He soon finds that there are others like him, who can fuse with the Bones to fight the invading monsters. However, Shōgo is different: It is his Bone in particular that the enemy is after, so he's recruited by their group in order to fight.