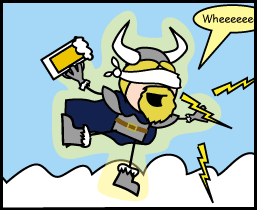 Sarah Jane: Doctor, you're being childish!
The Doctor: Well, of course I am! There's no point in being grown up if you can't be childish sometimes.
— Doctor Who, "Robot"
Advertisement:

The tendency of immortals in fantasy and science fiction to not act significantly older than they look — even if they're Really 700 Years Old.

Fair enough when you're talking about an alien species or fantasy race with a very long lifespan. Ancient vampires who behave like teenagers — or even like ordinary adults — may present more of a strain on credibility, relative to the seriousness of the genre in which they appear.

Often justified in the sense that an immortal wouldn't have to deal with many of the psychological aspects of growing older. Their bodies don't break down with age, so they don't have to come to terms with decreased mobility or mental capacity. They won't die of natural causes, so they don't have to contemplate the inevitability of death, or the possibility of an eternal reward (or punishment) and all the moral responsibility that might carry. They don't have to worry about their legacy or leaving anything unfinished, because there really is always tomorrow. They don't take on the responsibilities of parenthood, because the species survives without the need for each member of the population to produce and care for its replacements. Because of all this, these characters never need to "grow up" in the sense that a mortal does. It could also be down to the creators themselves simply having no idea how the psychology of a centuries-old being ought to be.

A darker take of this would be where the immaturity is a facade, and the character does indeed have inner angsts and turmoils that most mortals actually wouldn't be able to relate to. For example, being immortal but having mortal friends would mean watching them age and eventually perish while you remain unchanged, and while you wouldn't have to wonder about what awaits you in the afterlife, the question of what will happen to you when the world ends and there are no more people remains. Thus, inner angst is generated over stuff that mortals don't have to worry about, but is kept hidden except for special circumstances when the immortal character gets the spotlight, when such issues are thrown into the light for Hidden Depths or Character Development.

There is an argument to be made that absent changes to the body, the rate of 'change' to the mind slows even in real life; that is, the changes between birth and age 10 are vastly bigger than the changes from 10 to 20, which in turn are much larger than the difference between 20 and 40 or even 20 and 60. This argument would have it that absent the bodily changes of old age, the changes from 50 to 500 might not be so extensive as one would otherwise expect. It's also probable that a being with a longer lifespan could take a proportionately longer time to reach emotional maturity. A 100- or even 1000-year-old immortal alien might be the equivalent of a human ten-year-old, while for immortal children who find Not Growing Up Sucks (or rocks) it may well be that having their clock stopped at a certain age also froze their cognitive development. They may get smarter, but not wiser.

Another part of this trope is that very often the apparent ages of immortals correspond to their status, so that the leaders are in their 30s with teenaged followers, even when their apparent age should have no relationship to their true age.

If The Mind Is a Plaything of the Body, then this trope may result as a consequence. See Emotional Maturity Is Physical Maturity for the broader concept of physical age being more important than actual age as regards emotions.

The Collector is an immortal, ultra-powerful creature with the mind of a young child, whose only motivation seems to be wanting to play. While they don't seem to grasp concepts like death, morality, and the idea that people could lie to them, they are more than capable of splattering Belos across a wall with the flick of a finger, moving the moon like an app on a touchscreen, and ripping the Titan's head apart.

The Collector is an immortal, ultra-powerful creature with the mind of a young child, whose only motivation seems to be wanting to play. While they don't seem to grasp concepts like death, morality, and the idea that people could lie to them, they are more than capable of splattering Belos across a wall with the flick of a finger, moving the moon like an app on a touchscreen, and ripping the Titan's head apart.