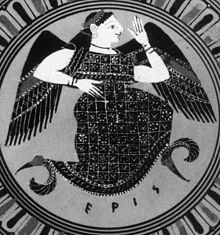 Discordia is the Latin name of Eris, who is revered as The Goddess in a little-known but far-reaching religion called Discordianism

. To quote The Other Wiki, it is "a religion centered around the idea that chaos is all there is and that order and disorder are both ideas imposed upon chaos." Which tells you what it is - in the same way that saying Christians worship Jesus tells you what's going on there.

Founded 1958-59 by Malaclypse the Younger, the principal text is the Principia Discordia. Considered by some to be a parody religion, and called "Zen for roundeyes" by others, Discordianism recognizes chaos, disorder, and dissent as being both valid and even desirable (in contrast to most other religions, which idealize order and harmony). The matron deity is Eris, Greek goddess of chaos - also known as Discordia to the Romans.

Because Discordianism embraces disorder and chaos, it's difficult to estimate how many followers it has or to correctly identify groups who align themselves with it. The Principia's encouragement to schism and form cabals - combined with the fact that many adherents do not hold Discordianism as their only (or even primary) faith - further complicates things; most adherents use Discordianism as a complement to their primary religion and may not identify themselves as Discordian in public (or on the census!).

The second most memorable tenet is that "every single man, woman and child on this Earth" is a Discordian pope (the feminine form sometimes being "mome"). While the Principia has an official Pope card, it does not grant Papacy; it only acts as a means of proof. Papal powers are not listed in the Principia, beyond a note on the card saying "A POPE is someone who is not under the authority of the authorities". Some have taken it upon themselves to elaborate further, listing on the back of their cards that their Papal rights include (but are not limited to):

A copy of the Principia Discordia can be found online here.

Do not confuse with a different Discord, or the Discord chat app. Or do confuse: he'd make a great Discordian.

Works inspired by Discordianism with their own pages here include: