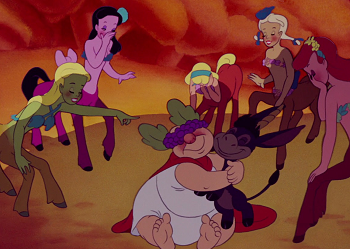 Bacchus, making an ass of himself.
"No more, you lying two-faced, no more sidling up to me, whining here before me. You, I hate you most of all the Olympian gods. ... If you had sprung from another god, believe me, and grown into such a blinding devastation, long ago you'd have dropped below the Titans, deep in the pit."
— Zeus to Ares, The Iliad, Book V (translation by Robert Fagles)
Advertisement:

Being God Is Hard. Having divine power comes with a lot of responsibilities, it can be Lonely at the Top, and sometimes being young and inexperienced makes the job difficult. But worst of all is getting shunned and treated as a joke, either by your fellow gods or even worse (and more dumbfoundingly) by mortals. The specific reasons for a god getting this treatment can be vary: due to them being a jerk, being lazy, because they messed up along the way, or maybe they are just incapable of enforcing their rule, a rather preposterous revelation given the expectations associated with such an entity. In short, they are the godly version of a Butt-Monkey.

For whatever the case, these gods find their divine powers have not helped to make their lives any easier. They are burdened by a long line of misfortune and quite often are deemed outcasts among their fellow gods. This may even lead them to instead seek the company of mortals. Odd Job Gods have higher chances to be a Loser Deity, but even some "cooler concept" gods may end up becoming losers.

Only applies if others are aware they are a god and still give them this treatment, otherwise it would be Almighty Janitor or Underestimating Badassery. If disrespecting the god leads to them retaliating and asserting their dominance it can become Do Not Taunt Cthulhu.

See also God Is Flawed which can lead to this. Subtrope of Cool Loser, with the "cool" part of being a deity.

Compare and contrast The Devil Is a Loser, which generally involves the entity being malevolent, ineffective, and lower on the Divine Ranks than a more respectable power unless it is combined with the title of God of Evil.