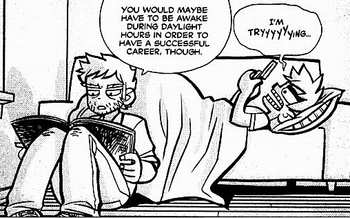 Are you just hanging around your sister's house, watching the kids, doing the laundry, or maybe even just playing video games, with no career prospects, and, from a business point of view at least, not contributing much, if anything at all, to the economy? You might be a NEET. Not currently engaged in Employment, Education or Training.

The NEET is most commonly a teen or college-age male. A NEET is either between jobs and down on their luck, an idiot who has failed the entrance exams for college, or a Lazy Bum with no goals in life, freeloading off whoever is around. Occasionally the NEET might also be a shut-in, and shunning society due to being unable to function well in it, because of some debilitating Ambiguous Disorder, agoraphobia, depression, anxiety, or peer pressure. Whether their condition is their fault or not, they are likely to get no respect whatsoever, be called an embarrassment to their friends and family, or have "Get a job!" yelled in their face at least once. Often more than once.

In most stories featuring this trope, the NEET is the designated Butt-Monkey, treated with No Sympathy. The Deadpan Snarker will take every opportunity to remind them that they’re useless, while more sentimental characters would, at best, try to motivate them to get a life with a Rousing Speech. Anything else, such as treating their situation as a symptom of a systemic problem of modern society, is uncommon enough to be considered a subversion. Regardless, it must be noted that the modern unfortunate conditions on the job market in many developed countries mean that the unemployed gradually undergo a shift from Acceptable Targets to being considered genuinely unfortunate. Thus, in order to actually deserve mockery, a NEET in modern media is often given other typically negative qualities such as being a slob.

If they aren’t the Plucky Comic Relief, then they are more than likely The Hero, and the premise behind their story involves finding a worthy goal in life and/or public acceptance. An Aesop can develop in two ways from there onwards: they might get into that college after that cram session with The Smart Guy, get together with a crazy girl who would kick their ass into gear, and generally become a fully functional member of society... or they can give said society the finger, prove that Hard Work Hardly Works and find an outlet for their Brilliant, but Lazy tendencies that render them appreciated in other ways than most people are.

Pretty Freeloaders generally manage to dodge this stigma on the account of, well, being pretty, despite the fact that they might not contribute money to the household, as it's more socially acceptable for a woman to be without an income than it is for a man (though this is changing). Only a woman in these circumstances who is also actively being hassled for not having a job or being in school can be considered a NEET. A housewife does not count, despite technically fulfilling all three of this trope's requirements.

Compare This Loser Is You, Hikikomori and The Thing That Would Not Leave. House Wife and House Husband may technically describe this trope as well, but in a much more flattering way — for many, maintaining a house and keeping a family together is a big enough job all on its own. There's also a Spanish version of this trope, called Ni-Ni note "ni estudia, ni trabaja", "neither studies, nor works". Contrast Idle Rich and Rich Idiot With No Day Job.

Not to be confused with Keet, though a keet NEET could exist (i.e. Jyushimatsu Matsuno).