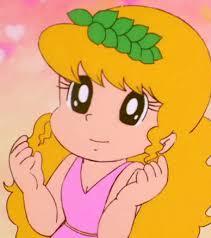 Little Pollon (Ochamegami Monogatari Korokoro Polon) is an anime series based on the 1977 manga Olympus no Pollon created by Hideo Azuma, who is best known for this series and Nanako SOS.

It tells the story of a little girl named Pollon, daughter of the sun-god Apollo, who lives her adventures on Mount Olympos along with the gods of Classical Mythology. Pollon really wants to become a goddess and, to prove herself of being worthy of this, tries to do many good deeds… with very poor results. Even if her attempts usually end up as Epic Fail, she never gives up and keeps trying to achieve her goal.

The anime television series was made by Movie International Co. (MIC), taking over the Saturday 6pm timeslot on Fuji Television from the same company's Honey Honey.note The show aired during local rather than network sales time, and thus aired at other times on other Fuji affiliate stations, or even on affiliates of other networks such as TBS. It consisted of 46 episodes and aired from May 1982 to March 1983, and was also popular in some European countries. Especially Italy. In Japan, it was popular enough for MIC to adapt Nanako SOS into anime the following year (with Pollon making a cameo in one episode). The anime is licensed in the US by Enoki Films, but there is no official English release as of yet.

Features Parental Bonuses galore although the show is definitely overall aimed at kids.