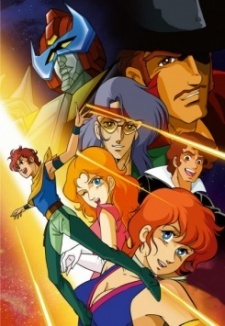 Legend of the Demon Lands (Makyou Densetsu) Acrobunch, officially known in English as Acrobunch: The Quest for Treasure, is an anime that aired in 1982 on Nippon TV. Led by scientist Tatsuya Randou, the Randou family undertakes a journey around the globe in order to search out ancient ruins to uncover the legend of Quetzalcoatl, which unlocks the key to a fabulous treasure. However, tailing the Randou family is Gopurin, an evil organisation that covets the legendary treasure for itself. The Randou family has the secret weapon of super robot Acrobunch. It becomes a race around the world of who finds the treasure first.

An MIC (Kokusai Eigasha) production with animation by Toei Animation note  The series was initially animated in-house by MIC, but Toei eventually took over animation duties later on , the series was an early job for ace female animator and character designer Mutsumi Inomata (whose future credits would include Plawres Sanshiro, Leda: The Fantastic Adventure of Yohko, Brain Powerd, Future GPX Cyber Formula and multiple Tales Series games) and the debut role for seiyuu Shigeru Nakahara as Jun (the youngest of the five Randou children).

Compare to the same production company's Honey Honey, which also features globetrotting adventurers, and the same year's The Mysterious Cities of Gold, which is also centered around a hunt for a mysterious treasure with Latin American roots (in this case, El Dorado).

A popular show in France in the '80s (known as L'Empire Des Cinq there), the show had its first original American release in 2021, when Discotek Media released the complete 24-episode series in one BluRay set (subtitled only).