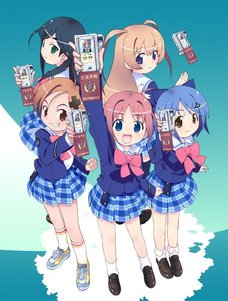 Manabi Straight!, occasionally given in full as Gakuen Utopia Manabi Straight!, originated in 2005 as a manga serialised in Dengeki Daioh. In 2007, it was adapted into 12-Episode Anime (plus an OVA) by ufotable (later of The Garden of Sinners and Fate/Zero fame).

In the year 2035, a sharp drop in the birth rate and social mores making it more acceptable for teenagers to start their careers early have emptied schools across Japan. Seiou Gakuen is a prestigious old private school that is slowly succumbing to the lack of students, and morale is at an all-time low among both the faculty and the students. Even the Student Council can't get anyone interested in joining, and its only member was practically shanghaied into the post.

Enter Manami "Manabi" Amamiya, a Genki Girl so genki that she's practically an unstoppable force of nature. She gets herself elected Student Council President on her first day after transferring in, and proceeds to turn the whole school upside down with fun. Hilarity Ensues.