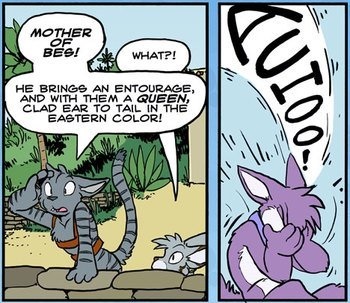 Sometimes an oddly-furred creature stands out even more.
Rotom Dex: Achoo!
Professor Kukui: I didn't know you could sneeze!
Rotom Dex: Someone is talking about me?
— Pokémon the Series: Sun & Moon, "Partner Promises"
Advertisement:

After a discussion describing a particular person or group of people, there will be a momentary fast cut to that person or a member of the group (who is currently uninvolved in the action) suddenly sneezing and looking confused, followed by a fast cut back to the original discussion. Often, an observing character will show Genre Blindness and suggest that the sneezer is coming down with a cold.

This can also be used as a segue without the cut back to the original scene. This is often an equivalent to the Ironic Echo Cut in western works.

As Team Gaim talks about him during a team meeting elsewhere, Kouta sneezes when the show cuts to his perspective.

As Team Gaim talks about him during a team meeting elsewhere, Kouta sneezes when the show cuts to his perspective.