Anime / A Place Further than the Universe 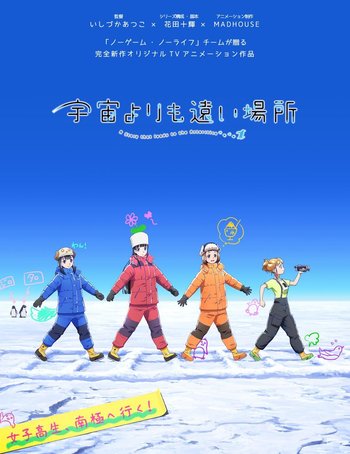 To boldly go where no cute anime girl has gone before.
"Water collects into stagnant pools. I've always loved watching it spill out all at once. Breaking free, liberated, rushing out. The energy stored up during its stagnation bursts forth. Everything springs into action!"
— Mari
Advertisement:

At 16 years of age, Mari Tamaki ("Kimari" to her friends) laments that she's been doing nothing with her life so far. Every time she's about to try anything risky, she chickens out at the last minute. That is until she has a fated encounter with another girl, Shirase Kobuchizawa, looking for her Missing Mom who apparently disappeared in Earth's last frontier — Antarctica. Shirase wants to go on an expedition to find out how and why her mom disappeared, which makes her the laughing stock of her classmates, but upon hearing her story, Mari eventually jumps at the call and decides to follow her on that journey. Soon, their efforts attract the attention of the bubbly Hinata Miyake, who is eager to stand out, and Yuzuki Shiraishi, a polite girl from a high-class background. Together, they set sail towards the frozen south.

Sora Yori mo Tooi Basho (A Place Further than the Universe, or Yorimoi for short) is a 13 episode original anime by studio Madhouse, directed by Ishidzuka Atsuko and written by Hanada Jukki, with character designs by Yoshimatsu Takahiro and music by Fujisawa Toshiaki. The series aired in the Winter 2018 season.

Crunchyroll is streaming the anime

for folks worldwide except Asia.

Who said it originally?

Hinata makes up a quote on the spot.

Example of:
Quoting Myself

Who said it originally?

Hinata makes up a quote on the spot.