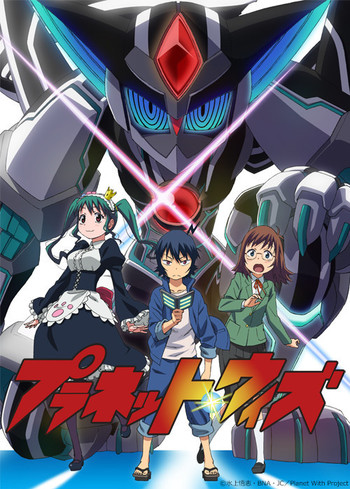 Soya Kuroi is an Ordinary High-School Student living with his surrogate parents, a green-haired maid and a purple cat-man known as "Sensei." He's got amnesia and had an oddly vivid dream about a dragon and a fiery apocalypse, but he just wants to live a normal life, and hopefully get to eat some real meat once in a while. But things take a turn for the weird(er) when Earth is invaded by giant floating wooden dolls with hands sprouting out of their bases. A squad of supers known as "Grand Paladin" appears to take them on, and "Sensei" informs Soya he must fight... against the heroes?

Planet With is a simultaneous anime and manga project led by Satoshi Mizukami, creator of The Lucifer and Biscuit Hammer and Spirit Circle. Crunchyroll is simulcasting the anime

worldwide, minus Asia. The manga however is running monthly in Young King OURS, similar to the rest of Mizukami's repertoire.