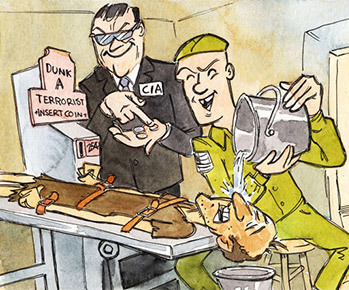 They'll be doing this shit at elementary schools in no time! It's legal, bro! Legal!
"I was strapped to a pallet and laid at an angle with a cloth placed over my mouth. My arms and legs were tied, and we had agreed a signal that when it became too much I would bang my arms on my legs. You start to breathe in and out, but when the water just fills everywhere up it just hits you. It changed my opinion completely. I realised that it really is a form of torture that shouldn't be used. I only lasted five to ten seconds, and the sound of my voice crying out to stop isn't me acting. The psychological damage of doing that to someone for even a minute would be indescribable."
— Spooks actor Richard Armitage on being waterboarded for the series 7 premiere, via the Daily Mail

As You Know, humans cannot breathe water, so drowning is both painful and frightening. Torturers will therefore sometimes use water as an instrument of torture.

There are three typical ways this is done:

The obvious disadvantage of this method of torture is that it's more than possible for an inept torturer to accidentally kill the victim rather than make them talk.

See also Electric Torture for another common tool of torture. Compare Swirlie, which is a variant of the ducking method typically done by school bullies with a toilet. May overlap with Drowning Pit.