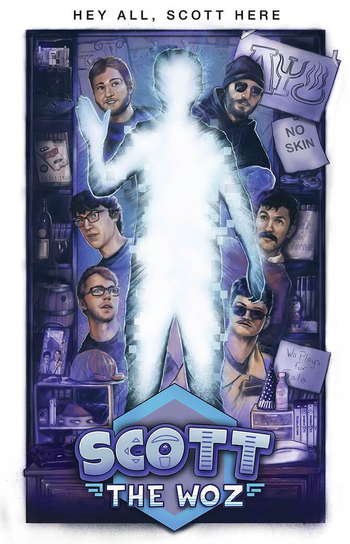 (real name: Scott Daniel Wozniak) is a YouTube personality who primarily makes content focused on, in his own words, "stupid Nintendo games". He is mostly known for his fast paced narration and the overall humorous tone of his videos.

While he started out his video making in 2009 for school projects, he started making YouTube content around the same time, making top tens and comedy skits under the name "Wozniak News TV", most of which have been reuploaded to a secondary channel called Scott's Stash

, which also features videos such as behind-the-scenes and bloopers from the main series, in-depth retrospectives on various Nintendo junk, and even occasional gameplay with his co-stars. He adopted the "Scott The Woz" moniker on November 7th, 2012, with the "Scott The Woz" series starting on January 7th, 2017.

His videos vary from comedy skits, straight game reviews, and retrospectives on video game-related topics usually under-discussed about in the industry. No matter what, this is all coated within a very off-beat sense of humor, which gets even wackier in his later videos.

In 2021, it was announced that Scott The Woz episodes would began to be broadcast on a television network. They began broadcasting on G4 on December 7th of that year.

For a list of Scott The Woz episodes, check out the recap page.

open/close all folders
Tropes # - L
Tropes M - Z
Wow, that was a whole lotta tropes! I'm glad that this is the only page about me!
...Dammit!
Breakout Theme plays
Feedback