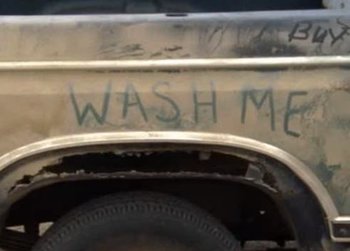 You think he gets the message?
"It's not a dirty window unless somebody writes 'Clean me' on it."
— Max Caulfield, Life Is Strange
Advertisement:

A very common, but also kinda childish, joke; a person sees a very dirty vehicle, and as a far from subtle message to the owner, writes "Wash me" (or something else to draw attention to the vehicles state, like "I'm dirty") in the dirt. Sometimes accompanied by a smiley icon or exclamation mark.

Can also be done with other dirty objects, like a window, but vehicles are the most common.

Far more harmless than usual graffiti, since no paint is involved, and all it takes to get rid of it again is, well, washing. It's a form of reverse graffiti