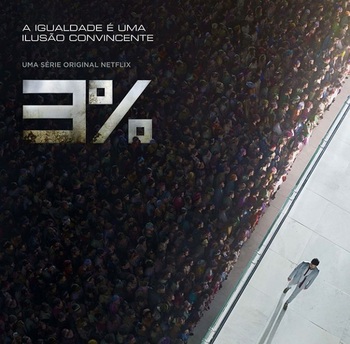 You deserve it...
Advertisement:

In the future, people are divided between those living in poverty and strife in the Inland and those living in luxury and comfort in the Offshore. Every year, people who have reached the age of twenty get the chance to participate in "The Process", a series of tests with the purpose of identifying those from the Inland deserving to join the elite in the Offshore. The Process tests the candidates' mental capacities, motivation, social skills and much more, ruthlessly weeding out all of those less than ideal until only the top 3% remain.

There are, however, those resentful of the system and wishful for a more equal distribution of the wealth. These people have joined to form The Cause, a subversive group that aims to dethrone those in living in the Offshore and create a better world for everyone. The Cause sent agents to infiltrate The Process as candidates in order to get in a position of power and topple the system from the inside.

, the first season became available worldwide on November 25, 2016. Season 2 was released on April 27, 2018, followed by a third season on June 7, 2019. In June 2020, the official Twitter for the series announced that the fourth season would be the last, releasing on Netflix in August 2020.