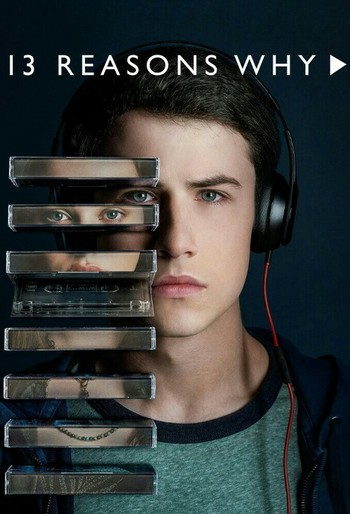 "The truth will come out, like someone said once. It remains."
"Hey, it's Hannah. Hannah Baker. That's right. Don't adjust your... whatever device you're hearing this on. It's me, live and in stereo. No return engagements, no encore, and this time, absolutely no requests. Get a snack, settle in, because I'm about to tell you the story of my life. More specifically, why my life ended."
Advertisement:

13 Reasons Why is a Netflix original series adaptation of the novel of the same name by Jay Asher which debuted on March 31, 2017.

One day, Liberty High School student Clay Jensen (Dylan Minnette) receives a package in the mail containing 7 cassette tapes. Upon playing the first tape, Clay hears the voice of Hannah Baker (Katherine Langford), the girl who killed herself just weeks before. The tapes are, technically, her lengthy suicide note.

13 reasons why she killed herself. 13 people who led her there. And Clay is one of them.

As Clay listens to the tapes one by one, he slowly uncovers a wider series of events occurring at Liberty High... and what his fellow students will do to keep him quiet, sometimes to cruel and dark extremes.

An adaptation of the novel originally existed as a film around 2011, with Selena Gomez in a lead role, but it was announced in 2015 that Netflix would make the adaptation for TV, with Gomez signed on as an executive producer.

Several months after its premiere, Netflix confirmed the series was renewed for a second season, which was released on May 18, 2018. The third season was confirmed under a month later, premiering on August 23, 2019. Several weeks before its release, it was announced that a fourth and final season was ordered, which premiered on June 5, 2020.

Has a recap page that needs more love.

13 Reasons Why contains examples of: