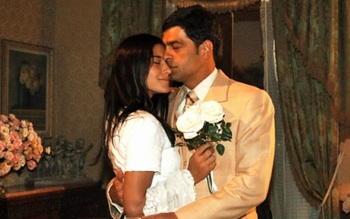 Alma Gêmea (English: Soul Mate) is a Brazilian telenovela that was produced and broadcast by Rede Globo between 20 June 2005 and 10 March 2006. It was written by Walcyr Carrasco and directed by Jorge Fernando. It's particularly notable for garnering the highest ratings for the 6 PM timeslot in more than a decade.

The plot begins in 1927 with the botanist Rafael (Eduardo Moscovis) falling in love with the ballerina Luna (Liliana Castro) at first sight. They get married and soon have a child. They don't know that Luna's cousin Cristina (Flávia Alessandra), who is also their housekeeper, is jealous of them. She has also been in love with Rafael since they met, and she also hates Luna for the fact that she inherited the family jewels. Cristina hires her former boyfriend Guto (Alexandre Barillari), to steal Luna's jewelry on a certain night after she leaves her debut show. However, the robbery ends in tragedy: Rafael tries to stop Guto from stealing the jewels and Guto shoots him. Luna throws herself in front of Rafael and ends up getting shot. While Rafael mourns Luna's death, in a distant village is born Serena (Priscila Fantin), the daughter of an Indian with a gold digger.

Twenty years later, Serena grows up to be a beautiful and lovely woman, but with memories that clearly don't belong to her, much to the amazement of the other Indians, the village teacher and Serena herself. Meanwhile, Rafael refuses to forget Luna, and has become a bitter and cold man. Cristina works as a housekeeper at Rafael's house, hoping that one day he will fall in love with her. Later, Serena's mother dies, and when her village is invaded by prospectors, Serena decides to try her life elsewhere. She moves to the city of Roseiral, in São Paulo, where she gets a job as a maid at Rafael's house.

Serena and Rafael fall in love with each other, but Cristina and her ambitious mother Débora (Ana Lúcia Torre) will do everything to separate the couple.