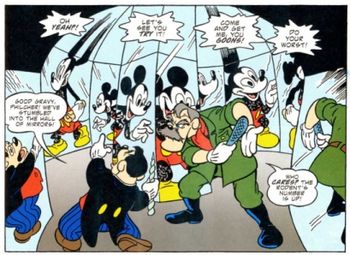 A standard Hall of Mirrors shot.
"An excellent place for final confrontations with heroes, the Hall Of Mirrors wins high marks for ease of use. All you have to do is lure your victim inside by dashing in yourself and then cackle with glee as they find you reflected back not once but a thousand times... When you have had your fun, seal the exits and fill the cramped space with some kind of liquid. Plain water works as well as anything, but why not add food dye for color. Or, for a touch of whimsy, use a sickeningly sweet fruit punch."
— How to Be a Villain, Neil Zawacki
Advertisement:

During The Chase, especially if at a carnival or Amusement Park, the quarry will duck into a funhouse. When the pursuer follows, he will be confronted with a hall of mirrors, dozens of panes of glass — every one of them reflecting an image of his quarry, taunting him. The pursuer has to figure out which is the real one before he escapes.

Though it often is so, the hall of mirrors need not be in an actual funhouse, or even in a carnival setting. It can also be used outside a chase scenario, perhaps in its natural setting or even for a generic kaleidoscope effect.

And now, Here Comes the Science:

Most of the trouble characters encounter in a hall of mirrors results from the mirrors not behaving the way real mirrors do. This is justifiable with mirrors that are magic, possessed, supernatural, or otherwise likely to behave oddly anyway, but it also happens with mirrors that are supposedly ordinary.

Frequently, a main character will collide with a mirror, having not realized they were looking at a reflection. In reality, as you approach a mirror, your reflection appears to approach from the other side, which really should be a tipoff. However, when a mirror is reflecting another mirror or two or three, it can create the illusion of there being a place to run to without the viewer's own reflection appearing to tip him or her off. In many real-life hall of mirror setups, however, the mirrored panels also have some clear glass (or clear plastic) panels mixed in just to make things even more confusing, and you can very easily walk into these as well since there is no reflection to warn you. A character who "walks into a mirror" may just be a director misremembering exactly why he mashed his face in that midway ride when he was seven.

Occasionally, a character will often see multiple reflections of an object, all of them quite close to the mirror surface, but will not be able to find the object. In reality, if the reflection of the object appears one inch behind the mirror, then the farthest that the real object can possibly be from the surface of the mirror is one inch.

Similarly, often the character being chased will show up in every single mirror. Every instance is the exact same as if they were all cameras recording a single feed. Similar to the two previous points, the actual distance the character is away is irrelevant, and the pursuer's reflection never gets in the way.

It's also very common to depict a Droste Image, which is easily created with two mirrors reflecting each other (though this is hard to depict in live-action without the camera being in the way).

Often these are combined, in which case it starts to seem like the "mirror" is actually just a sheet of glass and the object actually is on the other side (which is almost never the intention — although in real life it may be exactly the case). See also House of Broken Mirrors.

While pursuing a detached, conjoined twin, Scully gets many good looks at herself in a special room.

While pursuing a detached, conjoined twin, Scully gets many good looks at herself in a special room.