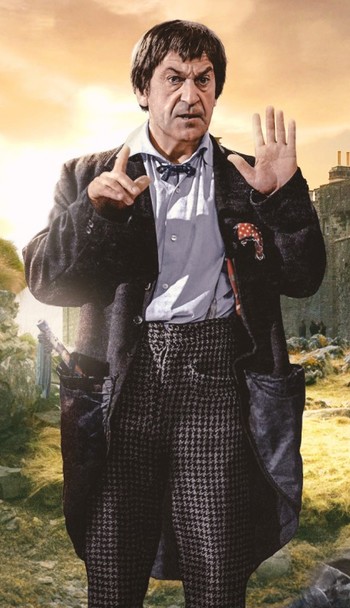 "Our lives are different to anybody else's. That's the exciting thing! There's nobody in the universe who can do what we're doing."
First appearance: "The Tenth Planet" (1966)
Debut: "The Power of the Daleks" (1966)
Exit story:note The Second Doctor is never shown regenerating on-screen, leading to the Season 6B theory that was taken as canon following "The Five Doctors" "The War Games" (1969)
Regeneration comic stripnote The Second Doctor has only ever been seen regenerating in his final TV Comic story. "The Night Walkers" (1969)
Played by: Patrick Troughton (1966–69, 1972–73,note He appeared in the four part anniversary story "The Three Doctors", which aired from December 30, 1972–January 20, 1973 1983, 1985)
Voiced by: David Coker (1997); Chris Walker-Thomson (2020); Michael Troughton (2022)
Advertisement:
"There are some corners of the universe which have bred the most terrible things. Things that act against everything we believe in. They must be fought!"

The cosmic hobo with the Beatles haircut. A more easy-going personality than his predecessor, though still very much an anti-authority maverick, the Second Doctor was a gadfly who enjoyed annoying everyone he met; he made an art form out of stealthily insulting his foes and allies alike.

Unlike his predecessor, who would often end up as a circumstantial hero by way of getting himself accidentally embroiled in dangerous situations and then having to find his way out of them again, the Second Doctor more actively felt he had somewhat of a moral obligation to help the oppressed and fight injustices wherever he came across them during his journeys.

He also had quite the knack for manipulation and deception; his favourite trick by far was pretending to be a bumbling and somewhat scatterbrained and naïve buffoon, generally acting clumsy and a little cowardly and asking seemingly perfectly innocent, but annoying questions, only to catch his adversaries off-guard and reveal that a darker and more cunning and strong-willed personality lurked under this harmless surface.

The Second Doctor's era ushered in the Monster of the Week premise and phased out the "pure" historical period stories where the only science fiction elements were the presence of the time travelling Doctor and his companions.

He liked to play the recorder (the musical instrument), and he carried a massive number of useful things in the pockets of his coat, including the now famous sonic screwdriver. (The Tenth Doctor would confirm that, as many fans had long suspected, the Doctor's pockets are Bigger on the Inside in "The Runaway Bride")

Stories with Two tend to be sweet and relatively drama-free, staying extremely close to the atmosphere of his TV series episodes.