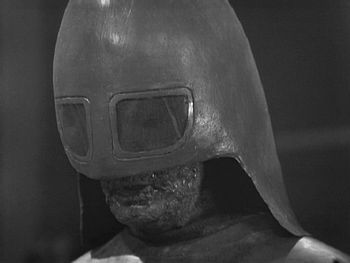 This is a far cry from those ice villains like your wisecracking Schwarzenegger.
"Your leader will be very angry if you kill me... I'm a genius!"
— The Doctor
Advertisement:

The one with killer soap.

Alternately, the one where Wendy Padbury got paint on her new outfit.

All six episodes credit Brian Hayles as the writer, but the last four episodes were very heavily re-written by Terrance Dicks. This serial first aired from January 25 to March 1, 1969.

The TARDIS lands on 21st century Earth, and discovers that the T-Mat matter transportation system upon which the entire planet's economy now relies is broken. The Doctor and companions agree to take an elderly rocket to the Moon (which houses the relay station) and investigate.

When they arrive, they discover that Ice Warriors have taken over the station and are preparing to invade Earth. They have seed pods which will be T-Matted to selected points on the Earth's surface before emitting fungus that will remove oxygen from the atmosphere, killing all humans and rendering the planet habitable for the Ice Warriors.

The Doctor manages to get the T-Mat working and transports back to Earth, where he discovers that the seed pods are destroyed by contact with water (quite a big hole in the Ice Warriors' plan there). He uses the weather station on Earth to trigger a downpour, destroying all the seeds, then T-Mats back up to the moon to misdirect the approaching Martian fleet into orbiting the Sun, where they will be destroyed.

Not to be confused with "The Seeds of Doom".