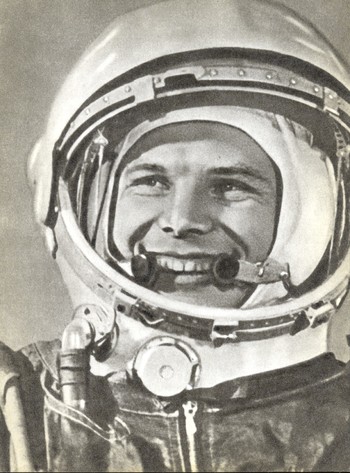 Поехали!note "Let's go!" - he shouted this as he took off.
Soviet villager: Can it be that you have come from outer space?
Yuri Gagarin: As a matter of fact... yes.
— A brief exchange on his return from space and being mistaken for an alien.
Advertisement:

(9 March 1934 – 27 March 1968) was a Soviet pilot and cosmonaut, and became the first man to fly into space on 12 April 1961, orbiting the Earth and returning to Russia. His flight made him an instant celebrity, and he spent the rest of his life promoting progress and continuing to participate in the Soviet space program.

Gagarin was born in 1934 in Smolensk Oblast, Russia, Soviet Union to a family of collective farmers. His father was a carpenter, and his mother was a reader. He was raised by his elder siblings, two of whom were enslaved by Nazi Germany during the Great Patriotic War, and did not return home until after the end of the war. He became interested in space and flight, and as a youth joined the Aero Club, where he learned to fly light planes. He then went to the flight school in Orenburg, and was eventually commissioned into the Soviet Air Force. At the academy, he met his future wife and mother of his children, Valentina, whom he married in 1957 after getting his wings.

Assigned to the far north, Gagarin gained expertise in flying in adverse conditions. He was promoted to Senior Lieutenant in 1959, and in 1960 was selected as one of twenty cosmonauts for the Soviet space program. A Soviet Air Force doctor evaluated him as follows:

Doctor: Modest; embarrasses when his humor gets a little too racy; high degree of intellectual development evident in Yuri; fantastic memory; distinguishes himself from his colleagues by his sharp and far-ranging sense of attention to his surroundings; a well-developed imagination; quick reactions; persevering, prepares himself painstakingly for his activities and training exercises, handles celestial mechanics and mathematical formulae with ease as well as excels in higher mathematics; does not feel constrained when he has to defend his point of view if he considers himself right; appears that he understands life better than a lot of his friends.
Advertisement:

Gagarin finished in the top six of the twenty candidates, and was subjected to further intensive training. He became one of the finalists for the first manned space flight thanks to his exemplary performance in training and his short height of 1.57 meters (5 feet 2 inches), which would let him fit in the cramped Vostok capsule. Finally, when the twenty cosmonauts were asked to choose whom they believed should be the first man in space, seventeen of them chose Gagarin. It was decided he would be the man for the pioneering flight.

On 12 April 1961, Gagarin boarded Vostok 1, which took off from the Baikonur Cosmodrome and began to orbit the Earth, making Gagarin the first man in space. After finishing his orbit, he ejected from his capsule (as planned) and landed in Russia near a village. The first thing he did was ask the villagers for a telephone. But as he was wearing his orange spacesuit and trailing his parachute, the villagers first thought he was an alien that had just landed.

Gagarin immediately became a celebrity, and toured around the world (except America—President John F. Kennedy issued an executive order barring Gagarin from entry into the United States) promoting space and science. One city where he was fondly remembered is Manchester, England. On the day he was scheduled to lead a parade, it rained heavily. The authorities offered to close the hood on his car, but he decided he would stand up without hood or umbrella, saying "If all these people have turned out to welcome me and can stand in the rain, so can I."

In 1962, Gagarin became a deputy of the Supreme Soviet, but spent most of his time at Star City, working on designs for a reusable spacecraft. He was promoted to Colonel in 1963, but the Soviet government decided to keep him away from space flights so that the hero would not die in an accident. Instead, Gagarin served as a mentor and adviser to the other cosmonauts. His best friend, Vladimir Komarov, had been selected to fly the Soyuz 1 mission, which Gagarin had personally condemned as unsafe. Gagarin knew the mission would end in death, so he tried to get himself selected as the pilot to prevent his friend Komarov from dying. At the same time, Komarov did his hardest to remain the Soyuz 1 pilot so that his friend Gagarin would not be killed. Gagarin supposedly even went to the launchpad in his spacesuit and tried to strong-arm his way into the Soyuz 1 capsule, but the mission took off with Komarov. The capsule's reentry system failed, and Komarov perished in the crash.

Gagarin remained an instructor at Star City, and also began to fly airplanes again to re-certify his pilot's license. On 27 March 1968, he and flight instructor Seryogin were flying in an old MiG-15UTI (a two-seat trainer variant of the obsolete MiG-15 fighter) over Vladimir Oblast when their jet began to plummet. The exact cause of this catastrophe is not known, but may have been unexpected weather, turbulence from another airplane, or a sudden swerve to avoid a collision. At any rate, Gagarin and Seryogin realized that they faced a choice. They could eject from the jet and save themselves, but the jet would then crash into a nearby town. Or they could stay with the airplane and guide it into a crash, sacrificing themselves but protecting the village. They chose to save the village, and both pilots perished in the crash.

Gagarin's ashes were buried in the Kremlin Wall Necropolis in Moscow, and several statues of him were dedicated around the world. Millions mourned him as a good man, and a hero to many. They remembered his warm smile, which Soviet space program director Sergei Korolev said was "the smile that lit up the Cold War." In a recent poll, Gagarin was tied at sixth place with Captain Kirk on the list of greatest space heroes. To this day, 12 April is a major holiday in Russia, and is celebrated as Cosmonautics Day, ensuring Gagarin's legacy will live on. Yuri's Night is a more recent international version, celebrating both Vostok 1 and the first flight of the Space Shuttle exactly twenty years later.

Appearances and references in fiction