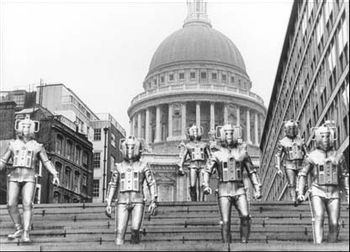 Not pictured: Horrifying noises courtesy of The Great Old Ones' grandfathers.
"You're an evil man, Vaughn. You're sadistic. You're a megalomaniac. You're insane. I pity you. But if I get half a chance, I'll kill you."
— Professor Watkins tells it like it is.
Advertisement:

The one with the Daffy Duck Cyberman.

Written by Derrick Sherwin. This eight-episode serial first aired from November 2 to December 21, 1968.

The TARDIS arrives in London in 1968 (or 1979), the Doctor and companions are enlisted by Isobel Watkins to find her uncle, a computer scientist working for International Electromatics.

The Doctor discovers that Vaughn is acting on behalf of the Cybermen, who plan to invade Earth, but is also planning to double-cross them and seize power for himself. The Cybermen send a hypnotic signal through all IE-made equipment, immobilizing most of Earth's population, and start emerging from London's sewers to take over. However, the Doctor has managed to protect himself and the others from the signal and succeeds in defeating the invasion, thanks in no small part to Zoe's phenomenal brain, plotting guidance trajectories for nuclear missiles to destroy the incoming fleet.

"The Invasion" presaged the shape of many Doctor Who stories to come, featuring an alien invasion of Earth aided and abetted by a corrupt industrialist, with UNIT providing cannon fodder and the military connections to fight back. As you might guess, it was conceived partially as a proof-of-concept for the Third Doctor's Earthbound era. It is the only eight-part story in the show's history; only "The War Games" from the same season (10 episodes) and "The Daleks' Master Plan" from three seasons back (12 episodes) are longer.note Although some consider the entirety of Season 23 to be a single 14-episode story under the title "The Trial of a Time Lord".

It was also the first incomplete story to be given the animated treatment, with the two missing episodes animated by Cosgrove Hall. Despite the success of the DVD, it would still be another six years before they would try reconstructing episodes with animation again, after which it became a regular event.