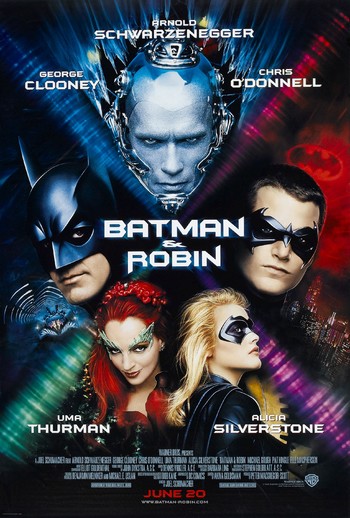 1997's Batman & Robin was the fourth and final film in the Batman Film Series. Like its predecessor, Batman Forever, it was headed by Joel Schumacher and retains that film's campier style, dual villains, and cartoonish aesthetic... and then some.

Following up the storyline from the previous movie, Batman (played by George Clooney) and Robin (played by Chris O'Donnell) are now a duo and do battle with the new cold-themed villain, Mr. Freeze (played by Arnold Schwarzenegger). The combative nature of their partnership is further tested by the emergence of a second villain, Poison Ivy (played by Uma Thurman), who has a grudge to bear against all mankind and drives a seductive wedge between the heroes. When Poison Ivy and Mr. Freeze form an unusual partnership and plan to freeze Gotham and take over the world, the Dynamic Duo appears outmatched. Good thing Alfred's niece Barbara (played by Alicia Silverstone) is in town and he made her a form-fitting batsuit.

The Caped Crusader wouldn’t grace the silver screen again until 8 years later when Christopher Nolan rebooted the saga with The Dark Knight Trilogy.

Not to be confused with the Batman and Robin (Serial), the Grant Morrison comic series of the same title, or the Frank Miller series All-Star Batman & Robin, the Boy Wonder.

"All right, everyone! Chill!"
Feedback