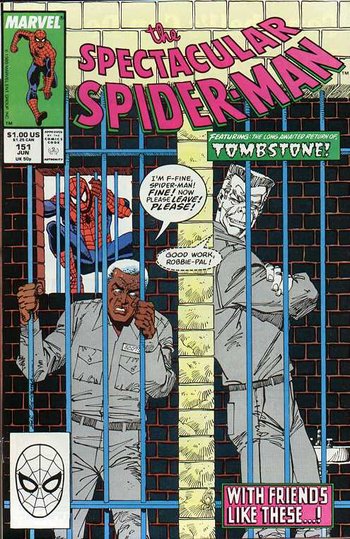 So, after a long struggle, the Big Bad has been defeated. He has been sent to a jury, found guilty of his evil deeds, finally sent to prison, and good riddance. Unless it's a Cardboard Prison, we'll never meet him again.

However, that was not the grand finale. The story continued, and a new big bad emerged. At some point, either the new big bad or the hero himself is sent to prison as well. This time, we can see in full detail how they get into prison, how he walks to his cell with the other prisoners insulting from the nearby cells, and finally, his cell. Guess what, you'll have to share it. Meet your new cellmate! Oh, wait, you already knew each other?

If it's the hero, being in a cell with his former enemy will simply makes things even worse than simply being in prison would be. And if it's another villain, the old villain may work as a mentor of villainy, or how to do things inside of prison, or even plan a escape ploy together (which may be followed by a Villain Team-Up).

This may happen in Real Life but it is extremely unlikely, as it is a giant Contrived Coincidence. But even if it did happen, your lawyer can simply explain the situation and ask the prison to assign you another cell. Which is likely to be accepted, as running as prison is complex enough as is, and they may prefer to avoid unneeded drama.

This trope is a specific form of The Bus Came Back. Compare You All Meet in a Cell.