Film / A Time to Kill 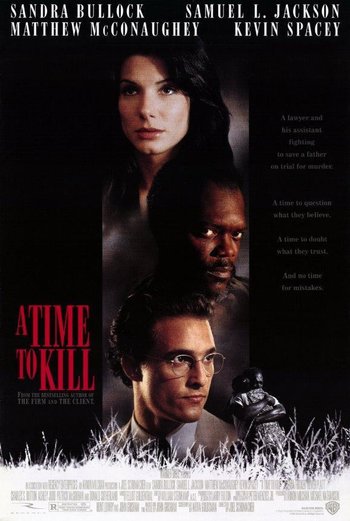 "It ain't easy saving the world, even one case at a time."
— Lucien Wilbanks
Advertisement:

Two white supremacists (Nicky Katt and Doug Hutchison) come across a ten-year-old black girl named Tonya (Rae Ven Larrymore Kelly) in rural Mississippi. They violently rape and beat Tonya and dump her in a nearby river after a failed attempt to hang her; she survives, and the men are arrested.

Tonya's father, Carl Lee Hailey (Samuel L. Jackson), seeks out Jake Brigance (Matthew McConaughey), an easygoing white lawyer. Carl Lee is worried that the men may be acquitted due to racism in the Mississippi Delta area. Hailey acquires an M16 rifle, goes to the county courthouse, and opens fire; he kills both rapists and unintentionally injures a police deputy (Chris Cooper) with a ricochet.

Carl Lee is arrested without resistance, and the plot then follows the trial of Carl Lee (who is defended by Brigance) and the racial undertones denoting the trial, as well as a number of sub-plots.

Alternative Title(s): A Time To Kill