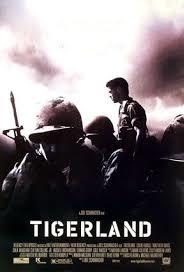 Tigerland is a 2000 movie directed by Joel Schumacher and starring Colin Farrell and Matthew Davies.

Set in 1971, the film tells the story of a unit in their last stages of training before they're due to be sent to Vietnam. Jim Paxton, a Naïve Newcomer and one of the few volunteers in his unit, crosses paths with and is eventually taken under the wing of Private Roland Bozz (Colin Farrell). Bozz is determined to not be sent to the war and does everything he can to cause trouble while also helping several other soldiers to escape the war by finding various loopholes in the army's regulations. Naturally, this earns him quite a few enemies - both among the volunteers in his company and among his superiors.

The movie, while not widely-known and only gaining a limited theatrical release, is often considered to be one of Schumacher's best directorial efforts as well as being credited with being Colin Farrell's breakout performance.