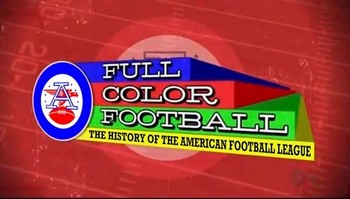 There'll never be a decade like The '60s. Never. [...] War... Space... Assassinations. And the AFL was there. Unbelievable.
Larry King.
Full Color Football: The History of the American Football League is a documentary miniseries focusing on the ten-year history of the American Football League, from its conception by Lamar Hunt in 1959 to its final game (Super Bowl IV) before merging with the National Football League in 1970. A co-production of Showtime and NFL Films, it originally aired in 2009, to commemorate the AFL's fifty-year anniversary.
Advertisement:

The documentary used game footage, interviews (some archival, some newly-shot), film clips (some of which had never been aired) and pop culture clips from The '60s to trace the history of the league, from its humble, uneven beginnings (fully-professional, well-funded organizations in Buffalo, Houston, Dallas (later Kansas City) and Los Angeles (later San Diego) were side-by-side with threadbare outfits in Denver, Boston, Oakland and New York) to its final days as accepted full members of the pro football world.

The documentary was aired in five parts:

Reruns can be seen on NFL Network, though no DVD or streaming release has been announced.