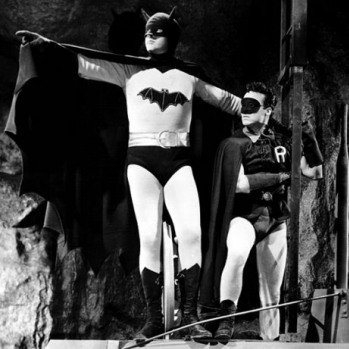 No, not that Batman & Robin.

The sequel to Batman's film debut, the 1943 movie The Batman, Batman and Robin was released in 1949 by Columbia Pictures and served as a sequel serial, consisting of fifteen chapters in a similar way as the original. Robert Lowery played Batman, while Johnny Duncan played Robin. Supporting players included Jane Adams as Vicki Vale and veteran character actor Lyle Talbot as Commissioner Gordon.

The plot dealt with the duo facing off against the Wizard, a hooded villain whose identity remains a mystery throughout the serial until the end. The serial covers their adventures in attempting to thwart the Wizard's nefarious deeds.

The serial got the RiffTrax treatment in 2013, with a new short released every month, taking over a year to complete.

See also The Batman for the original Batman film. This along with the film serial before it also inspired the 1960s TV series.

The Batman and Robin serial provides examples of the following tropes: