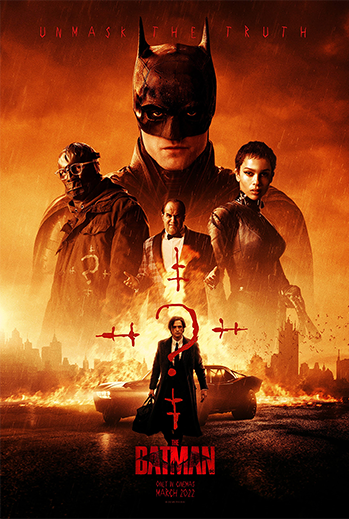 ♫ Something in the way... ♫
"Thursday, October 31st. The city streets are crowded for the holiday, even with the rain. Hidden in the chaos is the element, waiting to strike like snakes — but I'm there, too. Watching. Two years of nights have turned me into a nocturnal animal. I must choose my targets carefully. It's a big city... I can't be everywhere — but they don't know where I am. We have a signal now, for when I'm needed. But when that light hits the sky, it's not just a call. It's a warning... To them. Fear is a tool. They think I'm hiding in the shadows — but I am the shadows."
— The Batman
Advertisement:

The Batman is a detective superhero film based on the DC Comics character of the same name. It is directed by Matt Reeves and co-written by Reeves and Peter Craig, with Michael Giacchino composing the score.

The film is not set in the concurrent DC Extended Universe, nor is it connected to Joker, but is instead set in its own Alternate Continuity that begins a Shared Universe of its own, and is the first installment of a planned trilogy. Unlike previous first installments of standalone Batman film franchises, which usually featured elements of the character's Origin Story or showed him as a seasoned crimefighter from the get-go, the film is set during the formative years of Batman's crime-fighting career, with several members of his Rogues Gallery establishing themselves as his perennial enemies.

Its story follows Bruce Wayne/The Batman during the second year of his career as a vigilante/detective superhero in Gotham City as he tracks a Serial Killer leaving cryptic riddles addressed "To the Batman" on his victims — all of whom are tied to what the killer believes to be the source of the systemic corruption rotting the city from within. Along the way, he crosses paths with street gangs, Dirty Cops, organized crime, and a Classy Cat-Burglar named Selina Kyle. The film draws inspiration from multiple previous Batman works, including Zero Year, The Long Halloween, Ego, and Earth One.

The film was released on March 4, 2022, and was later released to digital download and streaming via HBO Max on April 18, a day earlier than planned, with a television premiere slated for April 23 on HBO and home releases slated for May 24.

On February 1, 2022, a prequel novel aimed at middle schoolers was released, serving as an Origins Episode for Bruce Wayne and Edward Nashton's journeys into their alter egos. Prior to the release of the film, it was announced that a pair of Spin-Off television series were in development at HBO Max, with Reeves and Dylan Clark executive producing. The first will focus on this film's iteration of the Penguin that will cover the character's origins and rise to power, along with events set after The Batman, while the second will explore Arkham Asylum and its inhabitants. A third show, set from the perspective of a GCPD officer during Batman's first year of operations, was announced before the others, but entered a period of Development Hell before resuming development in October 2022.

In the months leading up to the film's release, DC also released a comic book miniseries, Batman: The Imposter, through their Black Label imprint. It was written by Mattson Tomlin, who at the time was credited as a co-screenwriter of the film, but no longer so when the film premiered. While the story doesn't tie into the movie itself, it has a similar grounded tone and also features a younger Batman in the early years of his career.

A comic book series Riddler Year One, published through Black Label and penned by actor Paul Dano, tells the Edward Nashton transformation from an accountant in Gotham City to the Riddler.

A sequel was officially announced

, The Bat and The Cat Trailer

The Batman contains examples of:

open/close all folders
Tropes from A to M
Tropes from N to Z
"Wednesday, November 6th... I can already see — things will get worse before they get better, and some will seize the chance to grab everything they can. I'm starting to see now... I have had an effect here, but not the one I intended. Vengeance won't change the past — mine, or anyone else's. I have to become more. People need hope, to know someone's out there for them. The city's angry, scarred, like me. Our scars can destroy us, even after the physical wounds have healed. But if we survive them, they can transform us. They can give us the power to endure, and the strength to fight."
Feedback

As a group of thugs harass a bystander on a subway, Batman appears before them, calmly walking towards them with slow, trudging footsteps, just before he effortlessly takes down their leader.

As a group of thugs harass a bystander on a subway, Batman appears before them, calmly walking towards them with slow, trudging footsteps, just before he effortlessly takes down their leader.