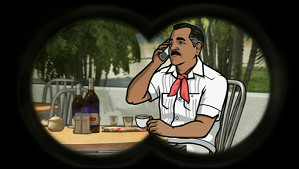 In which a character is looking at something in the distance through binoculars, and the viewer is treated to the POV of that character. Often "enhanced" by matting the screen with a double-circular frame, supposedly emulating the binocular experience. Indeed, this is so common that the more correct matting looks weirder.

More recently, this same shot is used with a matte frame and a tint that is reminiscent of looking through a sniper scope. Another variation has the character using extremely fancy binoculars with data overlays; thus transforming this into a variant of Robo Cam. Camcorder viewfinders are also common, for characters shooting video of each other.

It is also common for the viewer to first pan over the viewed object or person and then quickly move back onto viewing it. Sometimes the viewer can't believe what they saw, looks at it without the binoculars, then looks back at it through them.

Not to be confused with the Scope Snipe.