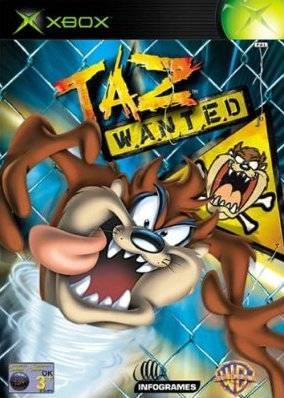 Taz: Wanted is a Licensed Game, developed by Blitz Games, published by Infogrames and released in 2002. It has no direct ties to any contemporary Looney Tunes works.
Advertisement:

Taz and his Love Interest She-Devil have been captured by Yosemite Sam as attractions for his zoo while he rebuilds Taz-Mania into a theme park. Naturally, Taz escapes and is out to get his girl back and get revenge on Sam. But first he's got to destroy all the wanted posters baring his likeness around the place and Rube Goldberg his way through the bosses.

The game is primarily a collectathon, but with a twist. Rather than just collecting the signs, Taz is intended to obliterate them with his mayhem. While this can be as simple as just finding the sign, it often involves a convoluted series of events and puzzles to achieve victory over the signs that are in out-of-the-way places. The Taz that appears here is based of the classic cartoons, so none of the characters from Taz-Mania appear.